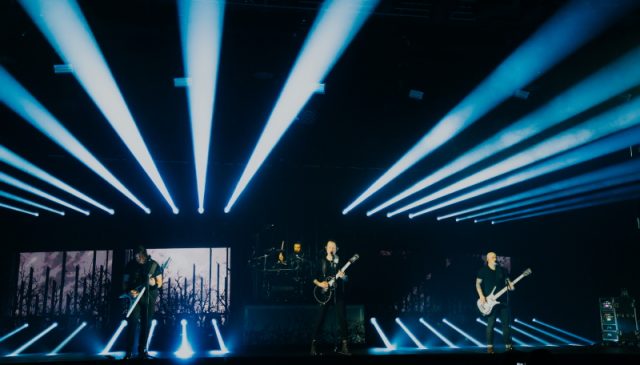 If you’re a regular gig goer – we would imagine you’ve seen your fair share of live streams over the last three months. Stream fatigue has set in for many. But on Friday night, Trivium may have just turned the concept of a live streamed gig on it’s head – at least for medium and large sized bands who can afford to invest some money.

A Light Or A Distant Mirror – presented from Full Sail University in Florida – at a UK friendly time of 8pm (Trivium know where their biggest fanbase is) was a new step in the collective ongoing experiment of streamed shows. A full length, full production show, performed in an empty venue, streamed across the world, for the price of $9. It included intro segments from UK scene mainstay Beez, including an interview with Trivium frontman Matt Heafy. Like a “proper” gig, it also included a support set – and a highly impressive one it was too.

UK metallers Sylosis performed a highly enjoyable 30 minute set, also accompanied by full production, in an empty venue from the UK, pre-recorded a couple of days earlier in the week. While not on the level of the Trivium stage setup (more on that shortly), Sylosis put together a great set – both from the visual and performance aspects. New songs I Sever and Calcified both sounded fantastic, while old favourite Conclusion Of An Age still has all the power and menance nearly twelve years after its release.

A Light Or A Distant Mirror presented a fantastic opportunity for Sylosis which seemed to introduce them to a huge new audience. There were many positive comments on the live stream and social media from people who weren’t previously familiar with the band but who were now big fans and going to check them out – which is exactly what Josh Middleton and co would have wanted.

The pre-show of A Light Or A Distant Mirror, including the Sylosis full set – is available to watch below on YouTube:

Now, to Trivium. A highly impressive array of lights and video screens backed the band as they took position on stage during the intro tape of IX, before launching into the title track of their most recent album What The Dead Men Say. Throughout the 1 hour 45 minute set, they put their considerable stage set up to good use. Standing tube lights overlayed the video displays, while spotlights and other rigs zoomed around the stage perfectly in time With the likes of Down From The Sky (dropped second in the set!) and Catastrophist.

The setlist, as one might have expected with it being the first Trivium show since the release of What The Dead Men Say, was weighted towards the new material, but there was plenty of time for old favourites, and it led to some fascinating song combinations. In Waves album deep cut Forsake Not The Dream sounded huge, and was followed by new favourite The Defiant. Pull Harder On The String Of Your Martyr was casually dropped in mid set (the Trivium equivalent of dropping Angel Of Death halfway through for the uninitiated), sounding as vital as ever. There wasn’t as much as talking to “the audience” as one would usually find at a Trivium show, which is totally understandable without a physical audience present for Matt Heafy and co to bounce off, but still had some nice touches.

Perhaps the most authentic moment of all came as Trivium were about to launch into another old favourite, Rain. Just as intro The End Of Everything was concluding, drummer Alex Bent (who up til this point had been firmly showing why he was the missing piece of the Trivium puzzle) broke something. This caused a short pause, but it was one more thing that made the viewer feel like they were in the room with the band, rather than watching from home. When things did resume, they did so in a ridiculous fashion, combining Rain with the heaviest track on What The Dead Men Say, Amongst The Shadows And The Stones. Combinations like this led to headbanging in living rooms, at desks and kitchen tables across the world – at least if the live Twitter commentary ongoing throughout the show was to be believed.

Finishing as they always do with In Waves, which lost none of its impact, even in an empty venue, A Light Or A Distant Mirror was a big gamble for Trivium, but one that looks to have paid off in style. Over 10,000 tickets were purchased for the stream – before the live broadcast, which was available for a further 48 hours on demand (later extended to 60 by popular demand). One imagines following the social media reaction, a fair few more tickets were sold for the on demand re-screenings. Couple this with limited edition merch being sold alongside the show, and it felt like a proper “event”, not just another show you couldn’t actually go to. The set up will have cost a fair bit – production of that quality does not come without cost – but A Light Or A Distant Mirror has set the standard for full band streams for the future – for those who can afford the initial spend to put it together.

With other renowned innovators like Code Orange having upcoming streaming events, it will be very interesting to see where such streams go next. Remaining merch from A Light Or A Distant Mirror can be found at the Trivium online store – hurry if you want to get any, because once it’s gone, it’s gone!