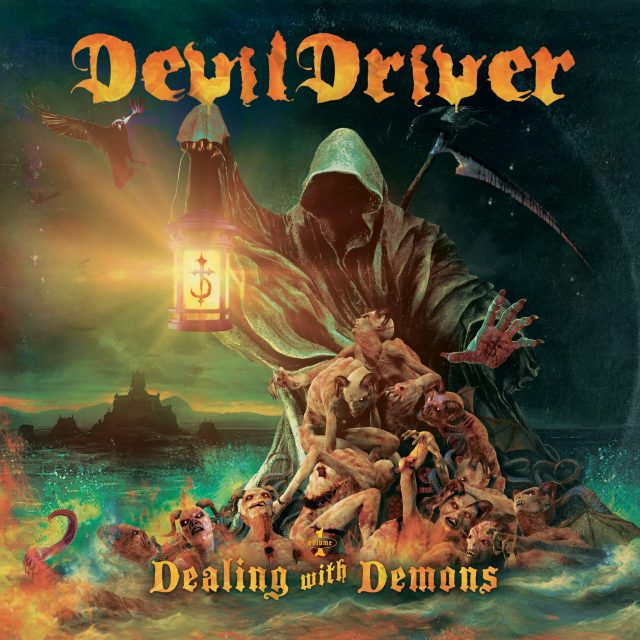 For close to two decades Devildriver have been one of the standard bearers in modern metal. Their first four albums are all stone cold classics, and even with personnel and label changes they have remained a consistent and reliable force throughout.

Dealing With Demons I is their 8th studio albums and follows on from their ridiculously fun Outlaws Til’ The End country covers album from 2018. It is also part one of a double album project, meaning there is still much more to come.

This is the most vicious and complete album that Devildriver has released in over a decade. So much of what people loved about the band in the first place are here on this album. Massive grooves, haunting imagery and more hooks than the entire Hellraiser franchise are all present and correct here.

Dealing With Demons I is a visceral bloodletting full of sharp riffs and spilled guts. A tour de force of emotional purging backed up by some of Devildriver’s best material to date. Cuts like Keep Away from Me, Nest of Vipers and Vengeance is Clear hark back to the bands early days. Pure unfiltered aggression with Dez Fafara in full mad eyed mode like a man possessed. You Give Me A Reason To Drink, is another belter, made even more pertinent with Dez being sober, so heaven help the person this song is aimed at.

Iona, and Witches provide the album with 2 of it’s darkest moments.Dealing with witchraft and death walking amongst us, they conjure up some nightmarish imagery that not only make them album standouts, but ensure they both stay with you long after you’ve finished listening to the album.

Wishing, one of four tracks released prior to the album coming out, has already become one of it’s biggest talking points. Most notable for the use of melodic vocals for the first time in Devildriver’s history, it is also one of the most relatable tracks on the album, dealing with the loss of a loved one. It’s heart wrenching, powerful and one of the most effective songs Devildriver has commited to tape.

Dealing With Demons I is Devildriver at their most violent, confrontational and raw, both musically and emotionally. This album serves as a timely reminder of how great Devildriver are when they fire on all cylinders. Not only is this is a top tier album in their own arsenal, it’s also one of the best metal albums of 2020.

Dealing With Demons I is out on October 2nd via Napalm Records.