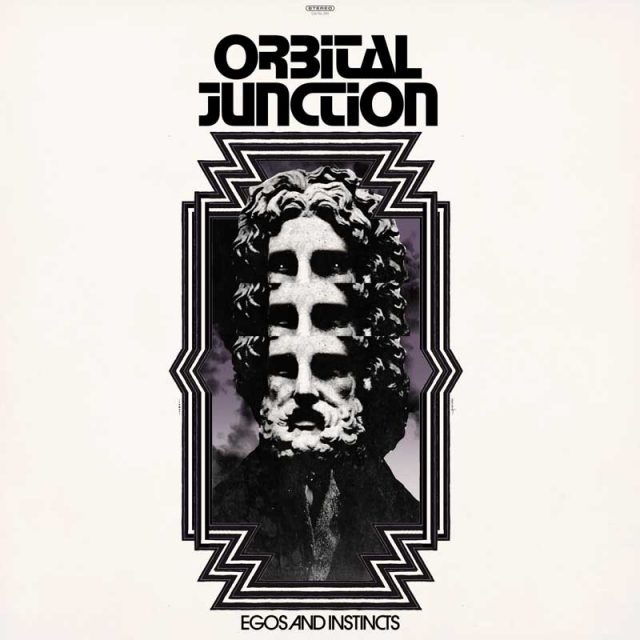 Orbital Junction are a London-based four-piece who first came to my attention when Feedback Radio play listed the rather fine 6ft2 from this their debut album Egos and Instincts. Now my usual M.O. when picking music is to trawl through the spreadsheets of new releases looking for bands I love, or at least know, or just waiting for something to jump out at me.

This time one of our editors asked me to review them as I’m somewhat of a connoisseur of all things stoner and it’s a good job they did as with a name like Orbital Junction I would never have grabbed it. Their name reminds me of some huge roundabout system on the edge of Chelmsford that I’ve probably been lost on at some point, but now I’m past that I’m really enjoying this particular ride.

The guys at Desertfest called them the best stoner rock band in London, which is high praise, but hey, they should know, right? There is something in the DNA of London bands that Orbital Junction share, a sort of gritty, sleazy emanation which runs through their grooves, like the whiff of booze on last night sweat-soaked t-shirt after a mad night out in Camden. There is certainly a whole lotta Orange Goblin in Orbital Junction’s make-up but the band are no mere copyists and possibly the strongest thing about this debut is the individual strength and identity of each song. Not merely 45 mins of recycled riffs and studious posturing, Egos and Instincts is a proper set of songs which rise above genre strictures and stand strong on their own.

Yes, lyrically there are clichés and mis-steps – we certainly don’t need another tasteless retelling of Jack The Ripper’s crimes (Mary Kelly) or shallow dips into Pagan mythology (Green Man), but we can forgive such youthful indulgence when each tune is packed with fantastic performances, really strong melodies and no shortage of chutzpah. That last element shouldn’t be overlooked: Orbital Junction already sound like rock stars.

The other big ace up the bands sleeve is vocalist Owen Armstrong who has a set of pipes good enough to grace any rock record – he can holler with the best of them, as he does to winning effect of the deep and groovy riff-monster that is opener Earthmover, but can also do a fantastic, soulful croon, such as on Addict. Like a mix of a young Ricky Warwick and Mos Generator’s Tony Reed, Armstrong may be the country’s best new metal vocalist – yes, he’s very impressive. The rest of the band are no slouches either, in fact the aforementioned Addict shows of the skills of each of the quartet, with lovely psych-tinged soloing from guitarist Ric Fordyce, and swinging masterful grooves laid down by bassist Billy Dale and drummer Jack Revans.

Addict and the closing minutes of the album’s final number Creep show the band can do much more than provide the invigorating Swedish massage of a damn good stoner pummeling and can tilt your head up skywards and elevate your mind and mood with swathes of Deftones-ish atmosphere and musical elan. It’s a fucking banger with a brain and shows just how much promise this band has. Orbital Junction are London’s best stoner band – at the very least, at least that.

The New Orbital Junction album, Egos and Instincts, is out now.