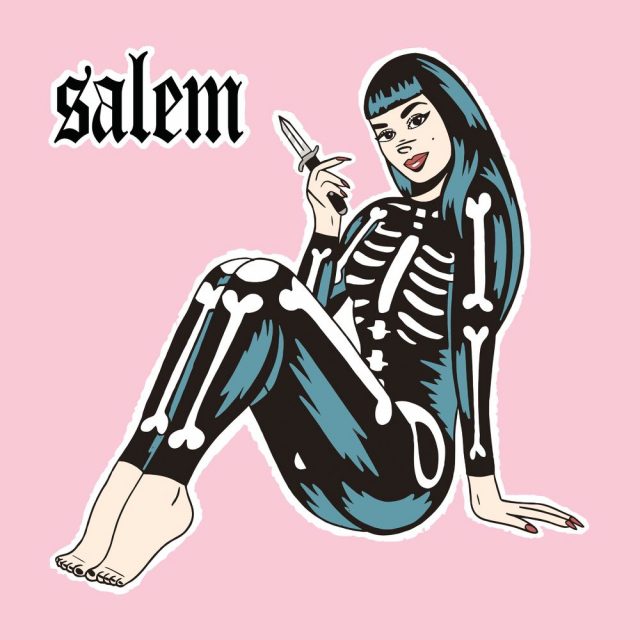 Salem, share their name with the place where the infamous witch trials happened (although i’d like to think the band are all big Sabrina The Teenage Witch fans!) are much cheerier prospect than their name might suggest.

The debut self titled e.p featuring William Gould from Creeper & Matthew Reynolds is a lovingly crafted slice of pop punk energy that acts as somewhat of a pallette cleanser for listeners after the ambitious heights reached on the latest Creeper album.

Free from the shackles of concepts albums and world building, there is an effortless freedom about Salem that sucks you in immediately. Tales of hopeless romance, wrapped in a 50’s aesthetic that are so infectious and so memorable you may never get them out of your head.

Don’t let the bubblegum pink colour scheme fool you though, as there is still a jet black vein of dark humour running thoughtout this e.p. I mean where else are you going to hear the act of falling in love compared to the death of a Hollywood starlet?

William proves once again that he is one of the best and most vivid lyricists in all of music. No one paints a picture with their words quite like him, in fact there are moments here where he is reminiscent of Robert Smith or Morrissey, in the best ways possible.

Destroy Me, Eyesore and Throat are 3 of the most well crafted songs you are likely to hear this year, and will have you smashing the repeat button, as you surrender yourself over to them. It remains to be seen whether or not Salem remains a single release curio or whether they become something more, like a game over screen on an arcade maching asking if you want to continue? it’s up to William and Matthew whether or not they they want to press yes.

For now Salem have put out one of the most fun, and endlessly replayable releases of the year. If this doesn’t inspire someone to write a 50’s era musical that plays out like a goth Crybaby with William as the lead then something has gone seriously wrong.

Salem is out now via Roadrunner.