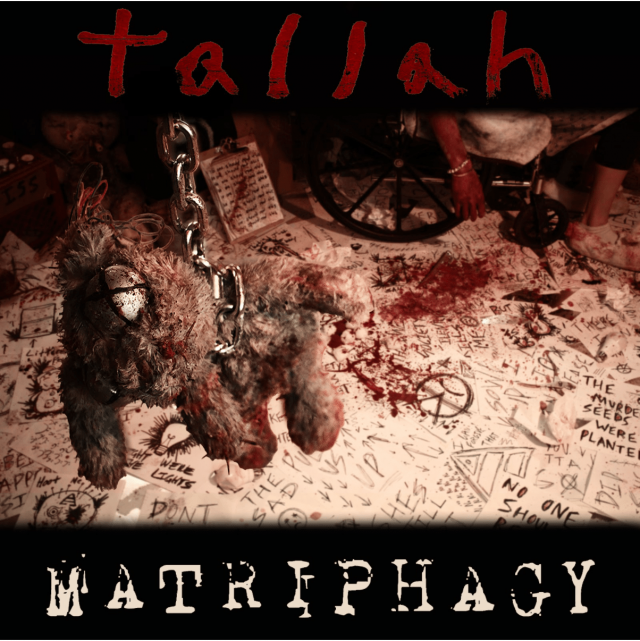 Tallah are one of the most buzzed about new bands in heavy music.It’s not hard to understand why either. They are most of the most dynamic, interesting and unhinged sounding bands to hit the scene in a very long time.

Matriphagy is the full length full up to their 2018 E.P No One Should Be Reading This. Let me tell you now, this is a band that you don’t to want to sleep on. There is a deeply disturbing concept at the heart of the album, and without wanting to give too much of the story away, I’ll just say that It’s Psycho via Donnie Darko as written by Nicholas Winding Refn. The music more than lives up to the unsettling nature and no doubt everyone else has tripped over themselves to tell you exactly which bands Tallah sound like.I think comparing them to other bands does them a massive disservice. Yes, you can see where the influences have come from, but what Tallah have created on this album is so unique and so distinctly them, that lazy comparisons will only take away from what makes them special.

There are some truly jaw dropping moments on Matriphagy. Overconfidence, L.E.D and Kungan are what I would consider the most accessible, and indicative of Tallah as a whole. Huge chunky riff, lots of bounce and an underpinning of electronics/scratches provide a soundscape for Justin Bonitz harrowing vocal gymnastics. It would be fair to say that he is the band’s secret weapon, his vocal performance throughout the album not only sells the main characters plight throughout the story, but genuinely gives the album it’s unnerving edge as he goes from deep guttural growls, to wailing shrieks and everything in between. It is one of the most diverse and impressive vocal performances I have ever heard on a metal album.

The band themselves are no slouches, and this album has absolutely no filler on it. Every song is vital to the overall picture and works together to create a tight, claustrophobic album full of paranoia, fear and anguish that is so tightly wound and played that it feels almost voyueristic listening to it in places.

This is not a pleasant album by any stretch of the imagination. Tracks like We, the Sad, Red Lights and The Silo really push the disturbing nature of the narrative along in vivid detail. You will likely feel like you will want to take a shower after listening to this album, but that is part of it’s grotesque charm. This is a visceral, violent record that sounds like it was created inside of asylum walls, as a last ditch attempt at holding on to a semblance of sanity.

Tallah are a band that a lot of people are talking about right now and rightfully so. This is the most explosive, disturbing and genuinely exciting debut album to come out in the last decade. Trust me when I say you do not want to sleep on this band, as they are about to become metal’s next big thing