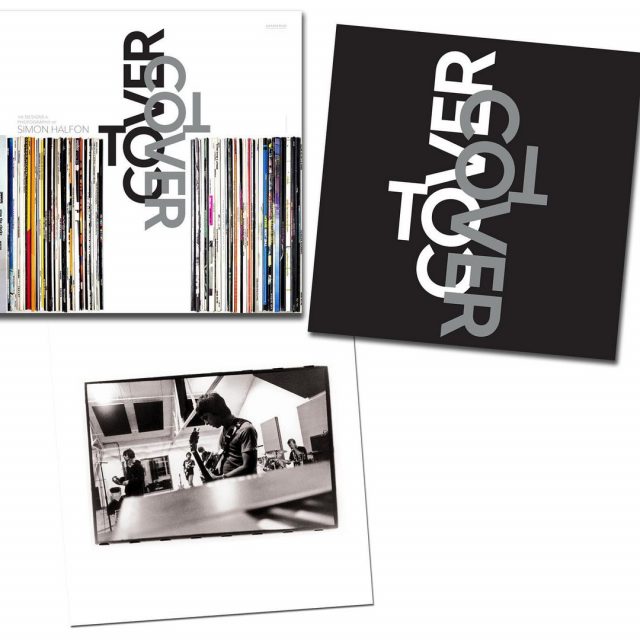 Beyond every great album, is of course a great set of talent musicians, but have you ever stopped to think of who’s behind the album covers that we become so familiar with? One of those great designers (and photographers) is the one and only Simon Halfon. With a career spanning over 40-years he’s designed covers for the likes of Oasis, The Jam, David Bowie, Paul Weller, Frank Sinatra and more!

For the first time ever Simon will be releasing a collection of his work in his brand new book Cover to Cover, which will be out on November 16th, and not only are we giving you the chance to win a copy, but we also caught up with the man himself to hear his story…

What came first your interest in art and design or music?
Music definitely came first – I really fell into art. I had no formal training, I was working at Stiff Records and by good fortune found myself in the art dept.

Where do you draw your design inspiration from?
The Beatles, Blue Note Records – Neville Brody was a big influence as were all those great designers and illustrators that passed through the doors at Stiff Records – Barney Bubbles and Ian Wright are two that spring to mind.

What was the first piece of design work that you did for a musician?
The single sleeve for I Want by Department S that I worked on with the group’s frontman and all round good guy – the very much missed Vaughn Toulouse.

Tell us, what’s it like knowing that your artwork is the visual icon/reference for some of the greatest albums to be made?
I never take that for granted – as record sleeves are very much the visual reference point for a particular album – when I think of The Beatles Help! LP – the album art springs to mind immediately – in fact the photographer – the late Robert Freeman who photographed many of the early Beatles album covers is also a huge influence. He designed the title sequence to the film A Hard Day’s Night too – and those graphics and typography were a huge influence on me – even as a kid, before I had an idea about such things.

Do you have any particularly memorable moments from your career so far?
Really I’ve been so fortunate and have a huge number of memorable moments. That was really the thinking behind doing this book – Cover To Cover. I’ve been so very fortunate to work with some of the great artists of the last few decades – from Paul Weller to George Michael to Oasis.

Working with George on Listen Without Prejudice – was a big moment for me. He was truly one of the good guys and a great friend. It’s still probably my personal favourite sleeve. Great record from a great artist.

How important is it for you to understand an artist and the music you’re designing artwork for?
It’s very important to collaborate with an artist – it’s their music and like you say, the album cover in many ways is the visual representation. With that in mind it’s hugely important to try and understand both the artist, their music and the direction that they’ve chosen with this particular record. I’d like to think the album cover is really there to compliment the music and the artist. Sometimes it really works – and the two form a perfect bond. Paul Weller’s Stanley Road is a good example – granted we were ever so lucky to be able to work with Peter Blake on that one. Peter is a great collaborator – I’ve had the good fortune of working with twice since then – on Oasis – Stop The Clocks and the most recent Who LP last year. Always a real pleasure spending time with Sir Peter!

Can you talk us through the process of how a cover is made? What sort of planning is involved, how much freedom of design do you have?
This varies from sleeve to sleeve – or Cover To Cover! – For example the original idea for Oasis Standing On The Shoulder Of Giants – was to have the band featured in silhouette on the rooftop of a Manhattan skyscraper. This idea had to be adapted as Guigsay and Bonehead had just left the band – so we kept the idea – replacing the band with five schoolboys playing football on the same rooftop. The photo session went ahead as planned and the campaign for the LP and all the singles used that NY image in one form or another. Oasis were always a lot of fun to be around too.

In some cases you have complete freedom – at the same time always presenting options and letting the band pick their favourite and then work on the chosen option. In other cases an artist will have a very specific idea, or we’ll look at the contact sheets for a photo session and one particular image will pop – and we’ll both know that we have an LP cover. That was definitely the case with Paul Weller and Wild Wood and George Michael and Symphonica.

A collection of your work will be available in your new book ‘Cover to Cover’ what sparked the idea for the book?
I’d been going through my archives during lockdown – all my photos and record sleeves. A lot of photos that really hadn’t seen the light of day for almost 40 years in some cases and most of them have never been seen at all. I also got involved in a couple of Tim’s Twitter Listening Parties – for the Style Council where I contributed various bits and pieces and there was so much encouragement after that – telling me that I must do a book. So here it is. It actually turned out better than I’d hoped as there’s so much content – the best part of 40 years to choose from and some nice little stories along the way too add to the images…

What can we expect from the book?
The book, as I say, spans forty years of design work – with a lot of photography that really hasn’t been seen before of The Style Council, Solo Weller, George Michael and Oasis. It also touches on my work as a film producer – Sleuth & Supersonic – and a few anecdotes along the way that tell the stories behind a lot of these adventures – looking back, that’s really what it’s been.

Being the ‘cover artist’ that you are, how hard was it to create a book cover for yourself?
Given that the book title is Cover to Cover – I thought that a selection of LP spines would work well and have a nice strong graphic feel that would work. I’m pretty pleased with the way that it turned out.

If you had to pick one cover as your favourite, which would you choose and why?
Listen Without Prejudice Vol.1 – if I had to pick just one – it’s such a great image for a great record from a great artist and friend.

Is there anyone you haven’t worked with that you’d love to design artwork for?
Even though I designed the sleeve for Come Together his collaboration with Paul Weller and Noel Gallagher – I wouldn’t mind having a crack at a solo Paul McCartney record…That said I’m pretty pleased with the work so far – aside from the artists I’ve worked with over a period of time – I’ve also been able to work on a couple of one-off George Duets – firstly with Elton on Don’t Let The Sun Go Down On Me and then with Queen on Somebody To Love. Amazing artists and amazing records!

Fancy winning a copy? Enter below!

Win a copy of ‘Cover To Cover’