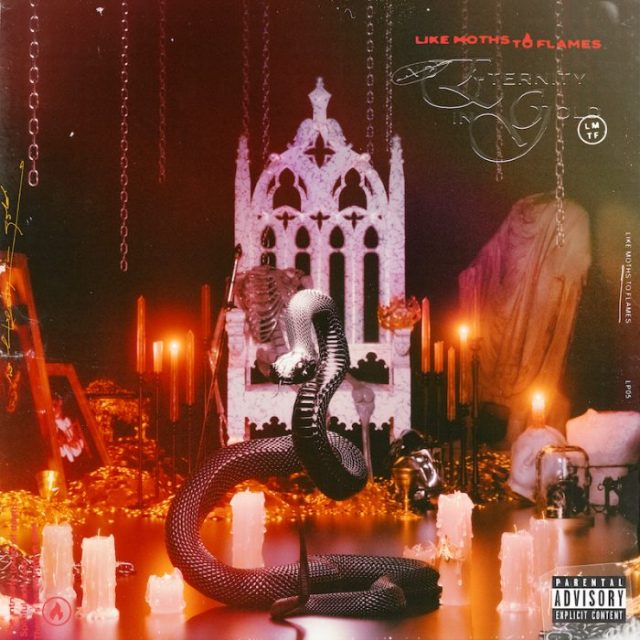 On their 5th studio album, metalcore stalwarts Like Moths To Flames showcase their years of experience in the scene with their highest quality project to date – No Eternity In Gold. Combining their unrelenting heaviness, technical licks and ear for melody, the band produce some of their most inward-looking yet punchy tracks on this album. With the overall theme of the record being that each track is a separate issue that frontman Chris Roetter deals with every day, everything in the tracklist fits together seamlessly.

As long-time inhabitants of the metalcore scene, Like Moths To Flames’ biggest strength comes from his soundscape. What many metalcore bands took from the nu-metal bands that came before them was the push and pull energy. Though there are moments in the 38-minute run time of No Eternity In Gold that have been done elsewhere, when that push and pull energy comes in at the right time, it does with significant power. Whether it’s in a big breakdown made even more seismic by the moments of pure technical metalcore or one of the album’s several earworm melodies, the energy of the track is what propels it into something greater. Though it’s a tried and tested formula for punchy metal tunes, metalcore done well is still an exciting adrenaline rush and that’s what Like Moths To Flames have done with this album when it’s firing on all cylinders.

In the same vein, the sound of this album is incredibly consistent for the most part. Though the subject matter of the songs provides some variation (as well as a linking theme), the soundscape is quite condensed. This results in some of the tracks that sound similar to others, not having the same impact as some of the finer cuts in the tracklist. Produced, mixed and mastered by Carson Slovak and Grant McFarland (August Burns Red, Rivers Of Nihil), all of the tracks feel punchy, just some shine brighter than others. Moments like the groove centric opening on “God Complex” (Track 5) and track nine, titled “Demon of My Own” which is by far the cleanest and most melodic moment on the record, provide some variation before the breakneck tempo kicks back into full gear. If you’re familiar with the band or similar outfits, nothing is going to catch you off guard here.

When Like Moths To Flames are showcasing exactly what they do best, their balance of menace and melody makes for a rollercoaster ride of energy. With plenty of catchy choruses scattered across the record, the feeling of the melody attempting to bully it’s way through the aggression to make it to the forefront is a real feather in this album’s cap. This gives these big choruses this triumphant, constantly pushing forward feeling that really adds to the tempo. When that tempo is going full force, constantly being pushed and pulled around, the record feels like a moment of celebration for Like Moths To Flames and where they’re at in their careers. Though this feeling is not always carried from track-to-track, even the songs that don’t fully catch fire have moments of ignition. It feels like their best work may still be to come from Like Moths To Flames and this record will surprise no-one but for what it is, it’s a solid entry into the band’s discography that highlights their best attributes.

No Eternity In Gold is out now. 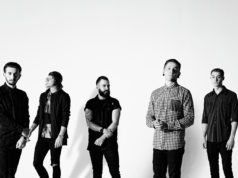