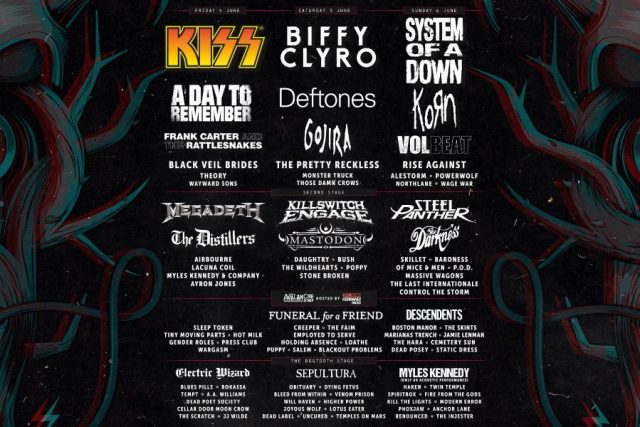 The Download Festival powers-that-be have granted us all another seventeen (17!) bands that have been added to next years’ return to Donington.

Topping the new editions, and headlining at Download for the first time in their legendary career are big four thrashers Megadeth! Dave Mustaine and co will headline the Zippo Encore stage on the Friday night, giving those who don’t fancy KISS’s UK farewell something thrashtastic to get their teeth into instead.

Excellent UK talent also features prominently in this new announcement. Extreme metal maestros Venom Prison join the line up and are always an unmissable experience for those who like things truly at the heavier end of the spectrum. Will Ghould’s new punk creation Salem will see him doing double duty with both Salem and Creeper on the Saturday of Download 2021. Meanwhile Boston Manor and Massive Wagons will both also be flying the home flags at Donington next Summer. Finishing off the home contingent in the latest announcement are hardcore mob Renounced, recent darlings of the rock media Static Dress and reggae punk rockers The Skints. Our neighbours from across the Irish Sea, folk metallers The Scratch are also heading over to make their Download debut.

Punk royalty also comes to Download 2021 in the shape of Descendents. They will be headlining the Avalanche stage on the Sunday night of the festival – replacing Bowling For Soup who haven’t returned from the 2020 line up. They’ll be joined by US metallers Fire From The Gods, Aussie metalcore favourites Northlane and even a band hailing from the old wrestling favourite parts unknown – The Injester! Finishing off the newcomers are Rock Sins’ old favourites Monster Truck, along with Dead Poet Society, Ayron Jones and Uncured.

All of the above bands join the dozens of bands already on the 2021 Download Festival line up, topped by main stage headliners KISS, Biffy Clyro and System Of A Down. Download 2021 takes place from the 4th of June 2021 – 6th of June (camp site open 2nd June – 7th June, Boardie Takeover on the evening of the 3rd of June). Tickets are available now in a variety of formats.

Stay tuned to Rock Sins for further updates on the Download Festival, as well as a wide range of the UK’s other heavy and alternative musical festivals.