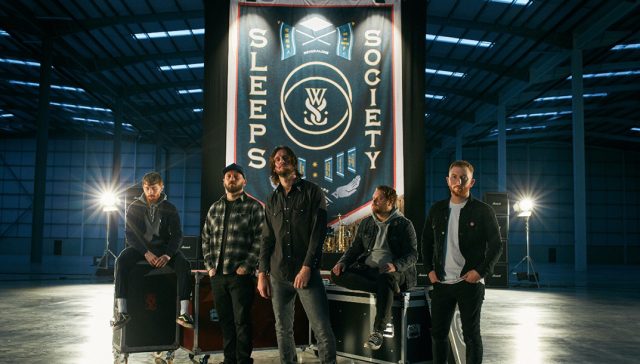 To coincide with the release of their fifth album Sleeps Society out on April 16th, 2021, using the power of Patreon, Sheffield metal band While She Sleeps have established the fan focused community, aptly named Sleeps Society. Which “is creating a sustainable future for WSS, supporters and other artists”, and who better to explain the innovative members only club than the founders themselves Lawrence Taylor (Vocals), Sean Long (Guitar) Mat Welsh (Guitar / Vocals), Aaran McKenzie (Bass) and and Adam Savage (Drums) otherwise known as While She Sleeps:

“After 14 years as a band and in the ever-changing climate that is the music industry, we are embarking on a new chapter of our life as While She Sleeps.

Our goal is to create a sustainable model for artists and creatives, to break from the traditional industry mold by building and developing a true interdependence between the band & fans.

With the future of live performances uncertain, the Sleeps Society will enable a secure existence for WSS and gives us the opportunity to stay connected with our fanbase. Developing new ways to provide for our supporters and fill the void left without live music. In these uncertain times this is the difference between life & death for the future of WSS. We aren’t prepared to be another band forced to give up simply because the system isn’t designed to support the artist.

The idea behind the society was created after our 14 year rollercoaster of industry experience. Overcoming mountains of hardship & financial debt it feels important to share the knowledge and help advise others who are drawn to a similar path as ours. This model will provide a new route for upcoming artists and bands similar to us, using our knowledge and guidance to help achieve a realistic career in the creative industries”.

Sleeps Society membership is available in four tiers, Support Member, Defiance Member, Mutiny Member and Revolution Member, ranging from £4.99 to £59.99. With each tier offering an array of members only benefits including a Writing Session Series, an ‘Amazing Anxiety’ Mental Health Series and exclusive Unheard Demos and Lost Ideas (up to 10 years old). All four offering General Support and the inclusion of Discord benefits, you better act fast however, as both the Mutiny Member and Revolution Member levels have already sold out. So show your support and join the Sleeps Society, to which While She Sleeps proudly displays within their purchasable banner All Are Welcome.

Putting words into action and truly making Sleep Society three-dimensional. While She Sleeps pulls no punches and lays out their intentions with their revolutionary music video for Sleeps Society, which begins with the press conference representation, announcing the awakening of Sleeps Society. With the declaration “don’t ever underestimate the fans”, their point is well and truly put across, thanks to the music video boasting 19k thumbs up, since it’s premier on October 15th, 2020, righteously putting two fingers up to anyone who says otherwise.

Make sleep be the last thing you do here: https://whileshesleeps.lnk.to/SLEEPSSOCIETY