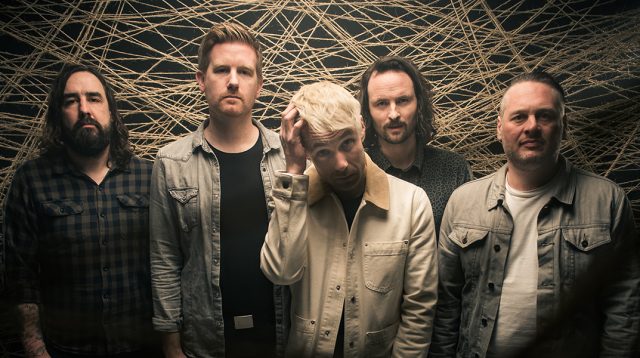 Back in April this year Lonely the Brave made a hugely awaited return with the release of their single Bound. The release of this track saw the band introduce newest member Jack Bennett as the new frontman. Throughout the year we’ve been treated to further tracks which will be forming part of the upcoming album, The Hope List, due out in January 2021. We caught up with drummer Gavin ‘Mo’ Edgeley for a chat about the new album, surviving lockdown, and knowing now was the right time for new music.

This is your first album with Jack as your frontman. How did you guys come together?
Jack actually played some shows supporting us I think, a long time ago on one of the previous album cycles. He’s just a lovely chap, he’s got an incredible voice. He was the first port of call really. We went and rehearsed up at his studio and just hung out for like a few weekends here and there, learning the songs, and he just nailed it straight away, so it was a no brainer, that’s the guy.

Lockdown has given us a lot of obstacles for finding new ways to work and being able to do our jobs, what challenges have you guys had to overcome?
Trying to get a record finished when you can’t actually travel anywhere was incredibly difficult. Having tours booked that have just been cancelled or put on the back burner – obviously, you can’t do them because no one’s allowed in the venues. Luckily, we actually got the record recorded before everything went to shit basically. If we hadn’t have done that, I’m sure it wouldn’t have been done now.

We’ve had a sneak peak listen of the album, and it’s just so good. We can’t wait for it to be out for everyone to hear it.
You’re the second person I know that’s heard it and given me some feedback on it which is really nice to hear actually. Someone that I’ve known for quite a while in the industry, he messaged me the other day and said, “Your albums incredible you hairy fuck” and I think that’s the best review I’ve ever had. I’ll keep that one.

“The last song on the album is the best song we’ve ever written in my opinion. It just blew me away the first time I heard that.”

What made you guys realise now was the right time for a new album?
It’s taken longer than we initially anticipated anyway, in my opinion it probably should’ve been out a year ago. But with everything that’s happened it’s just been shelved and put back and things like that. Every day is a good day to release a record in my opinion, but I think it’s come out when it’s ready. It’s been like two and a half years since we first started putting the songs together and actually releasing it. We’ve had a lot of time to sit there and listen back to it and think is this any good? And then get the collection of songs you really enjoy. We’ve never had that luxury before because there’s always been that outside pressure from either management teams or record labels, where they want something instantly. This was just something so ridiculously organic. We didn’t rush at all; it’s been a couple years. Everything has been our decision as well and just to get the opportunity to be able to do that as a band is really rare and I’m really glad we could do it. It’s all us. Jack’s done an amazing job on it, mixing, recording and his vocals on it are incredible. The last song on the album is the best song we’ve ever written in my opinion. It just blew me away the first time I heard that.

The album really does give off such a positive vibe, have you found it to be a good outlet from your frontline job?
Yeah, I suppose it keeps you going. I’m so busy at work at the minute, as you’d expect on 60-hour weeks currently and I’m ridiculously exhausted from it. But to know the record is actually coming out is keeping me going. I can’t wait to have it on vinyl. I’ve got a test press which I’ve been listening to. I’ve never had a test press for any of our records before.

There’s not a lot of live shows about at the moment, what’s something you’re missing the most about going to shows or playing shows?
I definitely realise how much I miss it now that I can’t do it. From a playing live perspective, I really miss the last two songs of a set. I know that we’re on the home and dry. I’ve got that far, what could possibly go wrong. It’s gonna be interesting, the worlds changed dramatically. I don’t know when we’re going to be able to do that, even now with a vaccine on the horizon. They’re not just gonna chuck 500 people in a room straight away. I think it’s gonna be another really tough year. We’re still booked for this April tour, but its all changing week in week out. Just hoping we can go see some live music this year, is that too much to ask? I don’t think it is.

Have you got any festivals lined up for next year?
I like playing festivals because you do these really short punchy sets. You play the hits then fuck off, that’s just what you do at festivals. And then you get pissed which is nice. You’ve got the job done and then you can relax. Just hanging out at festivals, having beers afterwards and watching bands. Something I’m really looking forward to and really missed. Drinking at home isn’t the same.
Hanging out at festivals with your mates, drinking and watching bands is one of life’s finer pleasures. And you probably don’t realise how much you miss it till it’s actually gone like it has.

“There’s always hope, you know just keep on going. This world’s not an easy place to live at the moment or even at the best of times. Continue and carry on.”

Is there a particular message you guys wanted to get across as a whole?
The album is called the Hope List so it’s full of hope. There’s always hope. I’ve actually got a really bad tattoo of the word hope on my wrist which I’ve just remembered! There’s always hope, you know just keep on going. This world’s not an easy place to live at the moment or even at the best of times. Continue and carry on. To an extent that’s what we did, we wrote a record after the change that we’ve had and it’s probably the best decision we’ve ever made. I’m just ridiculously proud of what we’ve created.

Do any of the songs have an extra special soft spot for you?
I would say the first song we wrote, Keeper, that was a long time ago. It’s probably a couple of years old. That was the first time we wrote a song, and I was like, “Yeah this is why we’re doing this. It’s a decent tune.” That song was probably the catalyst to keep on going.

Bright Eyes is about making sure we’re listening to people more. What would be your bit of advice for making sure we’re listening and being more present?
For a start I would say, don’t sweat the small stuff. Even though I’ve spent 20 years sweating the small stuff. It’s amazing because you can give really good advice without actually using that advice yourself. Which is good, because at least you’re passing on something that’s positive. I would just say, don’t listen to anyone else, don’t sweat the small stuff, and just do what you want to do with your life. Which is incredibly difficult especially when you’re young, when you’re so impressionable. Just try and enjoy life. And if you don’t enjoy it just get on with it. Because it ain’t going anywhere.

There’s still a little while before the album is out. Is there anything in the pipeline to keep fans ticking over till January.
I think there’s going to be another song out in December. We’re trying to get another video made as well, but it’s constantly trying to work out what’s going on with the state of the country at the moment, so that’s proving really difficult to get this one finally made. We’ve got some really good ideas for that.
We’ve got loads of little bits in the pipeline to keep us ticking over, there’s a really big schedule for it. We’re doing loads of press up until January really. It’s probably the most press we’ve ever done for a record, it’s really busy at the moment. Then just get the album out and hopefully people like it. I like it and to be honest it’s really unusual for me. I’m usually our biggest critic and I absolutely love this record, and my wife loves it as well. She’d tell me if she didn’t. We’re really proud of it.

Watch the video for Bound below: