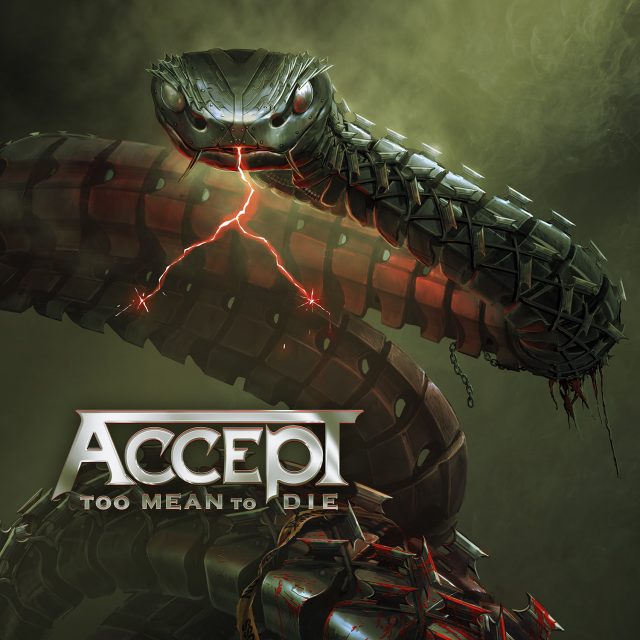 Accept’s latest outing, Too Mean To Die, certainly hits the ground running from the very start. The opening duo of tracks, Zombie Apocalypse and Too Mean To Die, are chock full of growling guitar riffs, screaming solos and those now trademark gravelly vocals from Mark Tornillo. The title track especially is a whirlwind concoction of what we most desire from Accept. A catchy chorus line, guitar solos escaping from every angle and a neck-breaking rhythm that gallops along like a bull chasing after the Coca-Cola truck.

It’s a pattern that you soon get used to with Too Mean To Die. There’s no filler or timewasting interludes to set the mood; the punches just keep on coming. And they hit pretty hard too!

Accept have teamed up with expert knob-twiddler Andy Sneap again to ensure that the production has all the razor-sharp bite that you expect from this band. The album was partly produced over the internet during the summer lockdown, with the band and Andy working on opposite sides of the Atlantic during some of the recording. Of course, they pulled it off with glorious ease and the three guitar (yeah, three guitar) attack in particular is explosive throughout.

The first slight respite from the non-stop relay of headbangers is The Undertaker. A bass-heavy sombre number that has no connection to the WWE star, but the lyrics do inspire visions of a similar character taking and burying his dead. One for the horror movie soundtracks.

Sucks To Be You follows on from there with the dirtiest of opening riffs and we’re soon back in full flow with the fist-pumping metal. There’s another ballad in How Do We Sleep to mix things up a little bit and the slightly ill-fitting instrumental end to the record in Samson and Delilah. However, Wolf and co. mainly keep their feet firmly to the floor throughout Too Mean To Die. Just how we like it!

Accept appear to be in a very rich vein of form at the moment. Albums like this one and 2014’s Blind Rage really stand up to the halcyon days of the Balls To The Wall-era back in the hazy and distant 1980’s. If anything, the band have got a little heavier and of course the subject matter of songs has evolved. We have lyrics bashing our internet-bred instant gratification generation nowadays compared to those magical moments from the 80’s such as “Son of a bitch, son of a bitch, you asshole, son of a bitch”.

Joking aside, it’s fair to say that Accept, just like their heavy rocking stalwart peers AC/DC et al., know exactly how to write their own branded material and will rarely stray from that path. You don’t pick up Too Mean To Die expecting anything other than a truckload of hard rock anthems, and thankfully, Accept are still delivering that in its very finest form.

Too Mean To Die is out via Nuclear Blast Records on January 29th 2021.