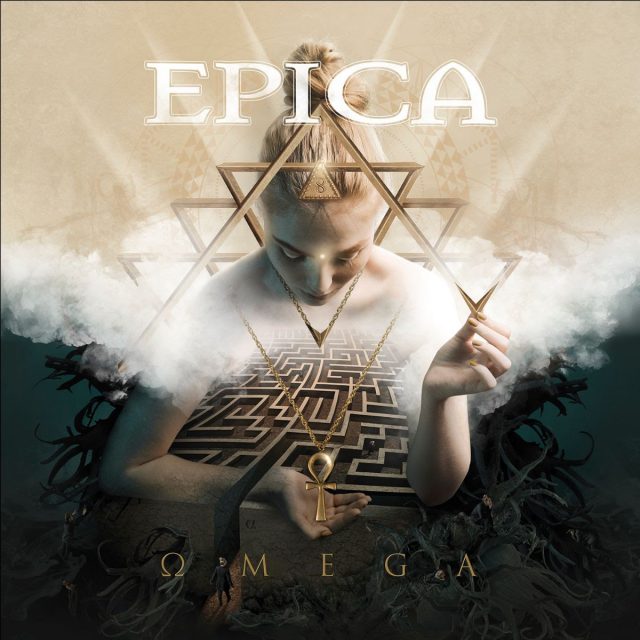 Overall Score: 9/10 Length: 8/10 Production: 10/10 Orchestral Composition: 10/10 Pros: Pushing the boundaries of Symphonic Metal to new heights. Cons: At 70-minutes long it’s a bit of a marathon listen – albeit an epic one.

It has been five years since Dutch Powerhouse Symphonic Metallers Epica released a brand-new album (save for reboots, The Solace System EP (2017), Epica Vs Attack on Titan Songs (2018) and The Quantum Enigma B-sides (2020). This is the longest gap between albums in the history of the band, but with the gap comes a rejuvenated Epica in the form of the mighty Omega.

With their eighth opus, the band set out with the lofty goal of “lifting Epica to the next level” which if you already know Epica’s music is obviously no mean feat. Let’s be real here, how can you out-epic something already epic by name, epic by nature? Well, the answer can be found across the Omega album.

Having regrouped as a unit a villa in Holland, apparently, for the first time in many years, the band came together in one location, taking the early ideas of all the members and crafting them into the final album compositions. It’s an approach that has made the end result, a much more coherent release and dare we say it, the album is all the richer for it. Recorded during 2020 with COVID-19 to contend with, luck was definitely on the side of the flying Dutch band, having managed to lock in album recordings from the Prague Philharmonic Orchestra and a Children’s Choir on the day before lockdown hit no less.

Like all Epica releases, Omega too opens with the bands’ trademark cinematic, larger than life orchestral opening. Is there a band that does cinematic metal album openers better than Epica does? The answer is no. The stunning Alpha – Anteludium sounds very Luca Turilli’s Rhapsody inspired (a theme noted across the album’s entirety in terms of the orchestral elements) with its piano opening and soaring flute melody before the full orchestra and choir join forces. It’s the kind of huge wall of symphonic sound that should only be witnessed live at Covent Garden or the Met.

Abyss of Time Countdown to Singularity (released back in December 2020) provides an exquisite fusion of classical meets metal. Vocalists Simone Simons and Mark Jansen trade lines and harmonise their perfect fusion of “Beauty and the Beast vocals” throughout the verses in a way only Epica can. Simons’ voice sounds truly ethereal here – particularly on the higher notes. Things get heavier mid-song before the orchestral breakdown half-way through the song gives touches of a Nightwish ‘Ghost Love Score’-esq flourish before sliding back into one of the catchiest chorus’ Epica has ever written. The end of the song piles on the Symphonic to 11 with the intro melody kicking back into gear against the backdrop of choirs’ vs death metal vocals and a huge finale.

Seal of Solomon brings the Arabian desert soundscapes and flair to the album from the orchestra to the guitar solos. Think along the lines of Kamelot’s Nights of Arabia meets a less power metal version of Luca Turilli’s Rhapsody’s King Solomon and the 73 Names of God. The approach and delivery here however is more refined than the Arabic textures seen across The Phantom Agony’s (2003) Seif Al Din – The Embrace That Smothers – Part IV. This theme continues throughout Code of Life which has a chorus that stands out as one of the best from the whole album. Here Simone Simons delivers some of the highest notes on the release, accompanied by a children’s choir and stunning orchestra lines which sound reminiscent of the opening of Dimmu Borgir’s Alpha Aeon Omega.

Diehard Epicans will of course be drawn to the third part of the epic ‘Kingdom of Heaven’ saga – ‘The Antediluvian Universe’. It’s a song that guitarist Mark Jansen has dedicated to his Grandmother and bandmate/fellow guitarist Isaac Delahaye’s Grandmother who both passed away around the time it was recorded. Like Parts one and two, of course, Epica broke the ten-minute barrier with the third part spanning just over 13 minutes in length. Epica’s colossal orchestral pieces are quite something to behold and across their back-catalogue, they have several stand out pieces in this same vein that are absolutely outstanding in their own right (no question!) but this may just be their boldest and most ambitious orchestral fused piece yet. You bet the Prague Philharmonic absolutely crushed this one and so did the choir.

Flutes and Strings with a sprinkle of percussion and horns coupled with choirs greet the listener’s ears on the three-minute classical instrumental opening which wouldn’t be out of place on a Classic FM best of chart. It’s a monumental wall of sound that definitely catapults Epica beyond the next level they were striving for. The track is full of light and shade and perfect transitions between the styles. It gets super heavy, and super progressive too, verging into almost Dimmu Borgir orchestral territory if we’re going to talk what can only be dubbed the heavier and darker end of the spectrum of symphonic music. It even has a freaking piano solo! It’s magical and you better wait for the stratospheric ending. It’s like Disney met the operas of Puccini and the emotive melodies of Gustav Mahler in a collision with metal. It’s truly divine and pushes the boundaries of modern symphonic cinematic metal and that’s no mean feat.

Of course, after a track so standout and incredible, how do you follow it? The obvious next step was for the band to slow things down and they did just that with the only ballad on the release, Rivers. This piece has a contemporary classical feel to it with Simone Simons accompanied by the soothing pianos of Coen Jansen. It’s a simple but beautifully done piece and builds with more and more instruments being added as the song unfolds. However, with the rest of the album so bombastic and in your face, as good as Rivers is, it does have the feel of more of a stand-alone track than a centrepiece to the album because it’s so different to the rest of the tracklisting. Perhaps Synergize – Manic Manifest, which hits the mark towards more traditional Epica territory, just may have offered a better transition in the order of the tracklisting to maintain the momentum generated from Kingdom of Heaven Part 3 – The Antediluvian Universe. It features a stunning guitar solo and epic breakdown section where you can to windmill to your heart’s content and Mark Jansen’s harsh vocals set to the choir are fantastic. The ending offers the most classical singing on the album, harking back to the band’s earlier days.

Penultimate track the Twilight Reverie – The Hypnagogic State feels like an encore track. Just when you don’t know what Epica can pull out next they bring it again with this absolute banger. Things draw to a close with the title track of the album Omega: The Sovereign Sun Spheres. The French horns are out in full force on the spellbinding movie-esq intro before hitting waves of prog, classically laced interludes, more choir chants, a sprinkle of more oriental-inspired licks, neat guitar solos and a few funky time signatures. It’s a seamless and dramatic conclusion to an album loaded with the highest of highs.

So, Omega then? Let’s make no bones about it. It’s a cinematic thriller from start to end. Like other albums of this genre, you’ll need to listen to it several times to fully appreciate the musical detail and layers in all their symphonic glory. It’s spectacularly done although you can’t help but feel unless Epica can take an actual full orchestra and choir on tour with them it will very difficult to replicate the same mind-blowing level of classical ecstasy live.

If there is any very nit-picking critique to be made about Omega it would be that standing at 70 minutes long it’s a fairly lengthy musical ride as albums go. Unless we start looking at Dream Theater, early Sylosis and second/third-generation Nightwish. This is not new territory for Epica with all but The Phantom Agony (2003) and Consign to Oblivion (2005) reaching or exceeding the 70-minute marker. Now whilst a 40-minute Five Finger Death Punch blitz is unlikely to work for music as intricate as a project like this, you can’t help but wonder whether losing a track or two would actually make the band more accessible beyond their usual waters. It’s an approach that certainly seems to have paid off for the likes of fellow countrymen Within Temptation and Delain at least. For instance, the album would possibly have benefited from a standout track that you could see being played on the music channels and metal stations to draw new fans in, in the same vein as a ‘Nemo’ or ‘Amaranth’, yet Omega is perhaps lacking in this department.

But with that being said, if you like your Metal symphonic, if you like your metal scattered with classical and film-score pomp and circumstance, then you’ll absolutely love Epica’s jaw-dropping eighth offering. Omega is truly the bands most epic and complete release to date and will surely prove difficult to “out-epic” when they come to write the next one.

If the bands’ mission was to thrust themselves to the next level, they far surpassed that and went to the moon with this one.

Epica’s Omega album is out on Friday 26 February 2021 via Nuclear Blast.