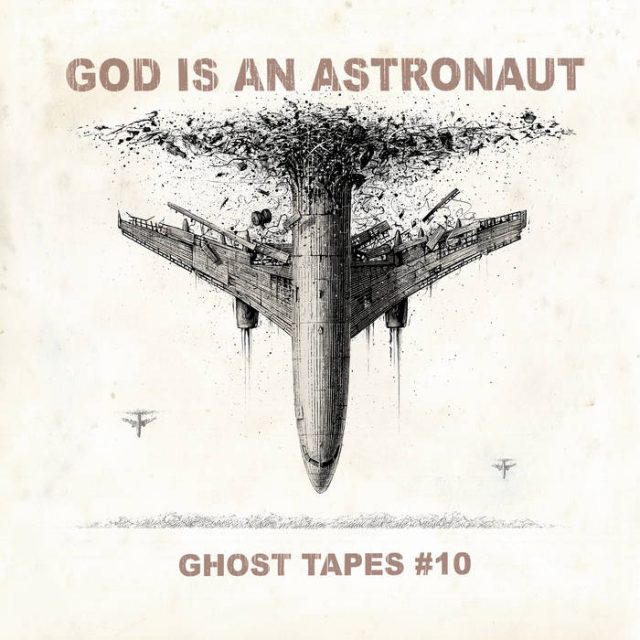 God Is An Astronaut have been bringing wonderful doses of post-rock to the world for almost twenty years now. With their big two decade anniversary firmly on the horizon, the time has come for the release of their tenth studio album, the aptly named Ghost Tapes #10. The Irish quartet have long been one of Europe’s best in the world of instrumental rock and post-rock, so expectations for Ghost Tapes #10 have understandably been quite high.

Opening track Adrift certainly lives up to it’s name. For the first two thirds of the track the soundscapes created give off feelings of unease, with the distortion and noise effects used to maximum when it comes to creating an atmosphere. The track then shifts into much calmer territory, the metaphorical equivalent of the boat that was originally fighting the tide but is now drifting in the sea. It builts up again before quietly fading out, or drifting off, if you will. One that fans of Pelican or Cult Of Luna should lap up with great joy. A fantastic album opener.

Burial features some subtle but excellent drumming from Lloyd Hanney, which paired with either Jamie Dean or Torsten Kinsella’s keyboard work creates an almost hypnotic effect. From here, the riffs that can only be described as agitated build and build with superb reverb. This is another track that builds to a boiling point, before cooling off and then coming back fiercely once again in such a way that it makes the six minute run time feel like it’s gone by in seconds.

There’s so many superb individual moments throughout the album its hard to pick out all of them, but the closing 90 seconds or so of In Flux is a dream for anyone who was a huge Red Sparowes fan (like this reviewer). In an album of incredibly high quality throughout, Fade is perhaps the pick of the bunch. Much more fast paced than the rest of this album, God Is An Astronaut show on Fade that they’re equally adept at sprinting through songs with Lloyd Hanney’s drumming again taking centre stage. The haunting, spirit-like vocals on Barren Trees (the only use of vocals on this album) feel like they will swallow the listener whole, while the rest of the track again creates a soundscape that is completely encapsulating. The album closer, Luminous Waves, is wonderfully peaceful, and provides a nice counterpoint to some of what has come before. In any event, the listener is left wanting more.

The best post-rock albums often share the quality of making minutes feel like seconds, and Ghost Tapes #10 is no exception here. God Is An Astronaut have created a truly fantastic album that rivals any of their previous album. Not too many bands can say that almost two decades in, but with God Is An Astronaut, it doesn’t feel like they’ve hit their limit yet. An absolute must-listen for anyone who enjoys instrumental rock / post-rock, and an album that will surely feature on many “best of” lists at the end of 2021.

Ghost Tapes #10 is out now on Napalm Records. For an example of God Is An Astronaut as a live force, check out this review of when they played the excellent Beyond The Redshift Festival.