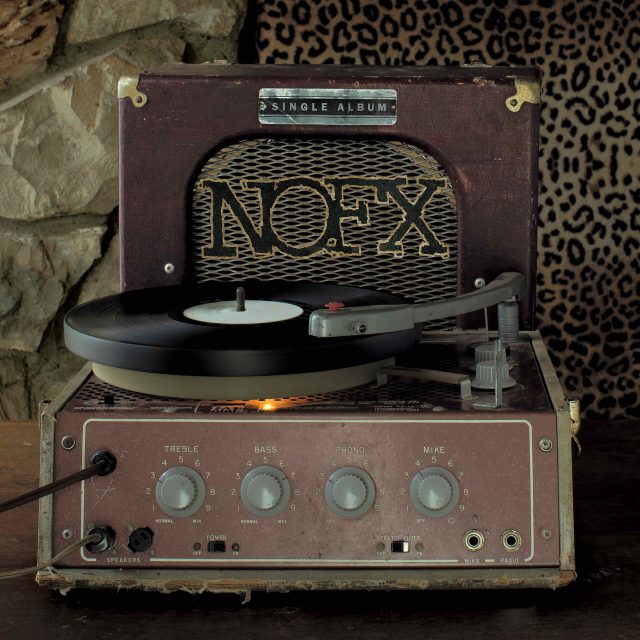 Punk legends NOFX are back with their 14th studio album titled ‘Single Album’ available via Fat Wreck Chords on the 26th February 2021. ‘Single Album’ is the follow up to 2016’s ‘First Ditch Effort’, which is the longest break between studio albums we have seen from NOFX.

The album begins with record opener The Big Drag, weighing in at a colossal 5 minutes 48 seconds, which in punk terms is practically a jazz odyssey. Within the first moments of the song you get that Fat Mike is in a dark yet reflective mood; he sings “There is only a finite number of tomorrows”, which in a year of uncertainty and change rings particularly true.

A common thread you see throughout this album is the serious and personal subject matter drawing on Fat Mike’s own experiences. For example, the song ‘I Love You More Than You Hate Me’ sees Mike’s lyrical self loathing claiming he is a “self-made scarecrow” which eludes to his mental state, for context check out Mikes solo work ‘Cokie The Clown’. We hate to say it, but we see the best of Fat Mike when the loathing is strong. When he delves deep into the platitudes of despair, we really see his best work. This self-contempt paired up with the familiar NOFX So Cal musical musings sees a return to old school NOFX.

“Fuck Euphemism” allows for a more delicate side. Well… as delicate as NOFX can get, addressing Mike’s sexuality or as he puts it “pronoun bar fight.” In a world where everyone cares about labeling themselves Mike addresses these issues in a satirical manner. Discussing in a recent Spin interview that he identifies as Queer. ‘I consider myself queer and a part of it, so I can sing a song like this. [I] live a BDSM lifestyle and I’m a cross-dresser, so it did bother me when people were calling me a cis male” Lyrically this song speak volumes. Fat Mike has no airs and graces on this subject with his lyrical content, for instance, “They thought I was just posing or on a publicity stunt until I did a line off Scarlet’s $100,000 dollar c**t”.

The arc of this album is intriguing, within other NOFX releases we usually get some comedic/ light-hearted relief from the heavy sludge of personal turmoil. However, with this release it delves deeper and deeper into darker subject matter. Reggae track “Fish In A Gun Barrel” and punk rager “Birmingham” traverse through a litany of real life reflection from mass shootings (the same thing that got the band in hot water a few years prior) to realising you are a drug addict and hitting rock bottom in the UK’s second city. The irreverent nature of Mike’s writing does allow for these subject matters to be more palatable. But it bears the question, should these conversations be easy listening?

Now, if I said Avenged Sevenfold and NOFX collab you’d tell me to shut up, but this happened. It actually happened. Ok maybe not in the music sense, but they were in the video, paying homage to ‘Linoleum’ with the track “Linewleum”. No that is not a typo… it is a reworking of their hit track.Talking about all the bad covers they have heard. Is it as good as the original? No! Is it worth your time? Most definitely! It has a charm to it and even when NOFX try and do a song badly, it still comes across as a real solid effort.

Recorded at Motor City Studios, sonically this album sounds fantastic, we attribute this to Bill Stevenson (The Descendents, Alkaline Trio, Rise Against) being at the helm. The record has a cohesion that comes with maturity, El Hefe, Melvin and Smelly are a tight unit, allowing Mike’s sloppy bass lines to run free all over the tracks. Musically there are a few surprises, from Dobro slide guitar at the start of “Doors & Fours” and the drunken slurring of the piano driven track in “Your Last Resort”. All ear candy even for some of you died-in-the-fire punk fans.
This album feels like you are living the life of a recovering addict, moving from a person in turmoil to a person repairing and taking control of their life. You truly get inside Fat Mike’s head and live the album through him. An incredibly personal and profound record, we finally get to see the talent that Fat Mike has as a lyricist.

14 albums in, nearly 40 years together, have NOFX said everything they needed to say? Definitely not. This record is a testament to the fact that NOFX are very valid, current and still have a voice. And a very powerful voice at that. Punk Godfathers have nailed another fantastic album to the cross.