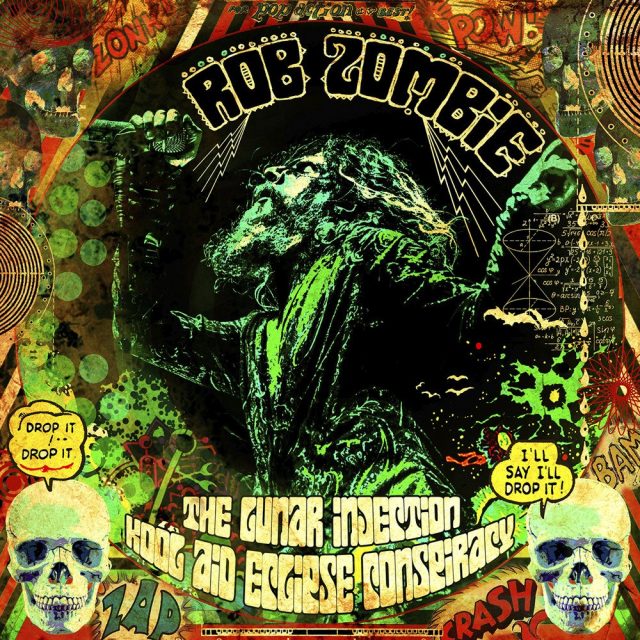 Rob Zombie is not a man known for his subtlety, which might explain why he has released an album called The Lunar Injection Kool Aid Eclipse Conspiracy in the midst of a global pandemic. But with every Zombie release, be it a film or an album, it’s a much needed and welcomed escape from reality.

Now, with Mr Zombie, you pretty much know what you are gonna get right off the bat. You will get an album that sounds like Rob Zombie, for better or worse. It might be hyperbolic to say, but this might be his best album since Hellbilly Deluxe.

Before I dive into the meat of the album, it has to be said, Rob loves an interlude and there are a number of them on here. This is a 17 track album and 7 of those tracks are interludes, that honestly do nothing but pad out the tracklisting. It’s always been a bugbear of mine over the years,the sheer amount of interludes there are per album. It slows the pacing of his records and is the one area he could do with self editing a bit more.

With that out of the way, the rest of the album is rock solid. The album’s first two singles King Freak (a crypt of preservation and superstition) and The Eternal Struggles of the Howling Man are both prime Zombie cuts that harken back to his White Zombie days, they are both pacey, riffy dancefloor fillers and excellent choices for singles.

One of the album’s biggest surprises is the ridiculously titled 18th Century Cannibals, Excitable Morlocks and a One-Way Ticket On the Ghost Train which is a zombified country song that randomly explodes into bursts of metal throughout, it’s a real standout showcasing a totally different side to him. On the flipside Shake your ass, smoke your grass is one of the worst songs Rob has ever committed to tape and the album’s weakest link. It’s lazy, features some strange vocal effects and is wholly forgettable.

The Ballad of Sleazy Rider and The Satanic Rites of Blacula are both destined to be live favourites. The real gem here is the closing track Crow Killer Blues which is my personal favourite track on the album and one of the best songs Zombie & Co have ever written. It’s dark, heavy and utterly badass, featuring some great guitar work from John 5 and an unmistakably menacing turn from Zombie, it’s the one track I keep going back to, and the one I’m most hoping makes it to the live set.

36 years into his career and Rob Zombie isn’t out to reinvent the wheel, this is an album full of energy and vibrancy that is up there with some of his best work. It’s an album made with love and something his core fanbase will no doubt embrace with open undead arms. These are strange and uncertain times and if this is the apocalypse then Rob Zombie has kindly provided the soundtrack to the end times.

The Lunar Injection Kool Aid Eclipse Conspiracy is out now.