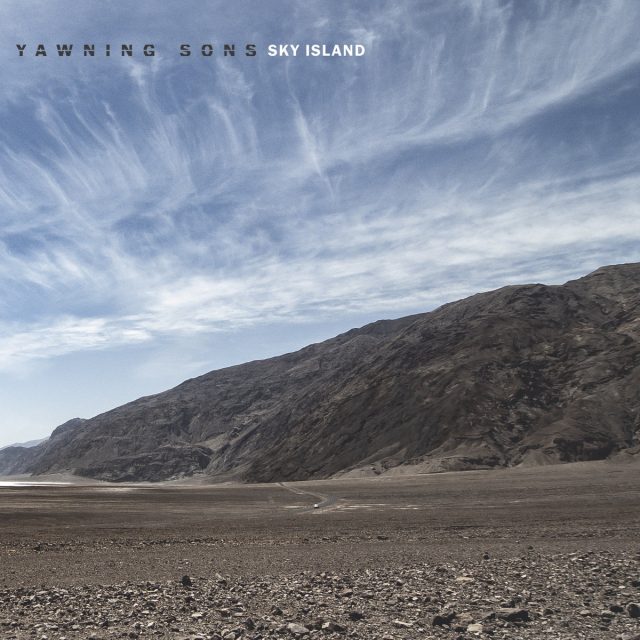 Over a decade from their original hook-up, Yawning Sons are back with another album of progressive desert rock. Recorded in Joshua Tree, Sky Island see’s Sons of Alpha Centauri and Yawning Man’s Gary Arce join forces to create some majestic desert tones. Also joined by the likes of Scott Reeder and Mario Lalli, this is as genuine as the desert gets.

Desert music is often derided for the constant stream of identikit bands. Bands worshipping Sabbath while cooking up a fuzz in the style of Kyuss are literally falling off the conveyor belt every day. It’s not always a bad thing, there are plenty of great bands keeping the flag flying out there.

However, there are some things you just cannot replicate.

Sons Of Alpha Centauri have been painting their picturesque soundscapes for us over the years with enough material under their belts to call them veterans of the scene. As for Yawning Man… veterans would be an understatement. ‘Godfathers’ is a title thrown around a lot in musical terms, but there would be no such thing Desert Music without these chaps.

I once heard someone describe Yawning Man as “The sound of the desert” and I don’t think there is a better way of putting it. So, I won’t try…

Gary Arce seems to be able to conjure up the ambience of the desert plains armed with just a guitar and a few pedals. His unmistakable tones ring through on tracks like the beautiful Cigarette Footsteps complimented by King’s understated vocal approach.

It’s when things really slow down that the album takes on a whole persona of its own. The wistful Passport Beyond The Tides washes over like a refreshing breeze of calm and is indeed a passport to the Palm Desert.

Shadows and Echoes is a standout moment on Sky Island. Carrying slightly more pop-punch than the typical Yawning Sons tracks thanks to the vocal input of Wendy Rae Fowler, it brings a real and surprising 80’s vibe to the forefront while remaining restrained from going into a full raucous romp.

Soothing but plaintive in equal measure, this album is chock full of magical dreamscapes but is focussed enough in places to make it a song-driven album rather than disappearing down an ambient rabbit-hole.

Sky Island is the sound of two bands (plus a few friends) moulding together in spectacular fashion.

Sky Island is out now via Ripple Music.