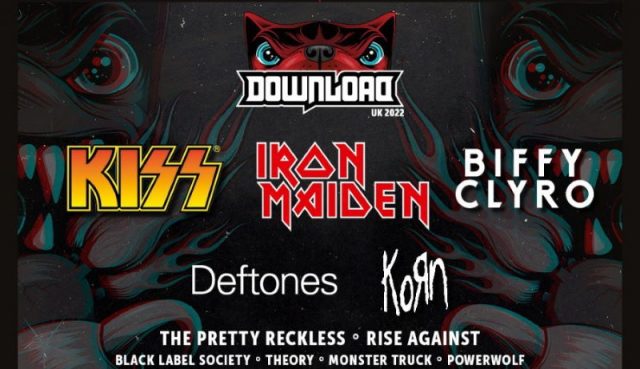 A bumper announcement from the Download Festival team about Download Festival 2022 this morning! A mixture of bands from the cancelled 2020 and 2021 lineups, along with some fresh faces have given us all plenty to look forward to in June 2022.

Confirmed alongside headliners KISS, Iron Maiden and Biffy Clyro for the main stage (likely for sub-headline slots) are the returning KoRn and Deftones. Also appearing on the main stage throughout the weekend are the likes of The Pretty Reckless, Rise Against, Powerwolf, The Raven Age, Black Label Society, Theory (Of A Deadman), Those Damn Crows, Monster Truck and Wayward Sons.

For The Second Stage, headliners Megadeth and Steel Panther return from the cancelled 2021 edition of Download. They are joined by sub-headliners The Distillers and The Darkness (days appearing to be confirmed). Alongside these four, Lacuna Coil, Airbourne, Control The Storm, Daughtry, Skillet, Wednesday 13, Of Mice & Men, Massive Wagons, Ayron Jones and The Last Internationale will all be appearing across the weekend.

The Avalanche Stage line up is already bursting at the seams. All three headliners have been announced; Funeral For A Friend return to headline the Saturday night. Descendents also return for Sunday night, while there is a new headliner for Friday night in the shape of The Ghost Inside. Alongside the headliners there is a wealth of young up and coming talent mixed with more established names. Holding Absence follow up their smash hit success album The Greatest Mistake Of My Life by returning to the Download Festival lineup for 2022, along with their former split release friends in Loathe. Also on the Avalanche Stage across the weekend are Boston Manor, grandson, Sleep Token, Trash Boat, The Faim, Wargasm, Marianas Trench, Jamie Lenman, Static Dress, The Hara, Salem, Press Club, Blackout Problems, Cemetary Sun and Dead Posey.

For The Dogtooth Stage, headliners Electric Wizard and Sepultura return, with the third headliner to be confirmed. There is again a wonderful mix of the up and coming and the established across some of the heavier aspects of rock and metal, punctuated with artists like A.A. Williams (who will surely be on many people’s must see lists). The full list for The Dogtooth Stage is Blues Pills, British Lion (Steve Harris pulling double duty), Dying Fetus, Bleed From Within, Twin Temple, Bokassa, Venom Prison, Spiritbox, Kill The Lights, Tempt, Fire From The Gods, Higher Power, Dead Poet Society, Joyous Wolf, Cellar Door Moon Crow, Modern Error, Lotus Eater, The Scratch, Dead Label, Phoxjaw, JJ Wilde, Temples On Mars, Anchor Lane and The Injester. Last but very much not least are As Everything Unfolds, who’ve had a huge success so far this year with their album Within Each Lies The Other.

Download Festival 2022 takes place from the 10th – 12th of June (campsite open 8th – 13th, boardie takeover on the evening of the 9th of June). Tickets are on sale from Ticketmaster now. Stay tuned to Rock Sins for further updates on Download 2022 as well as the UK’s other rock and metal festivals!