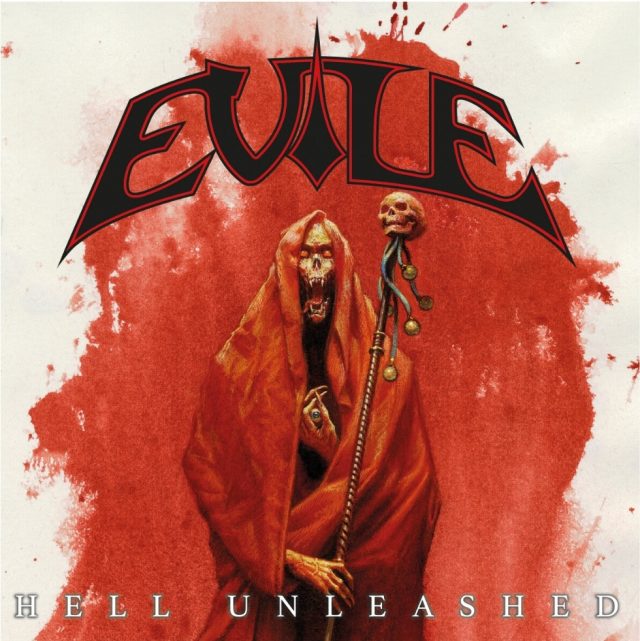 Thrash is one of the most adversity ridden sub genres in all of metal. You’d be hard pressed to find a band out there that hasn’t fought themselves back from the brink at least once. Evile are an example of this, having had their fair share of ups and downs. Having gone through a hiatus and a personnel change, they are finally back and dare I say it, stronger than ever.

Hell Unleashed Is the band’s first album in 8 years and the first one without founding member and original vocalist Matt Drake, who is replaced here by Ol Drake, now on guitar and vocal duties.It seems the time away has done them the world of good as this is thrash metal in its purest unfiltered form.

From the opening moments of Paralysed, this album does not let up. It’s the musical equivalent of running blindfolded through a forest laced with bear traps while people with chainsaws chase you. It’s brutally efficient and will leave you wanting the tiniest moment to breathe.

Gore featuring comedian Brian Posehn sounds like what I Imagine playing Doom on the hardest difficulty after downing 10 Red Bulls feels like. It’s violent, vicious and has one hell of killer solo in it.

There is not a single wasted moment on Hell Unleashed. This is an album that has been trimmed of all fat, and just cuts to the chase, no frills, just big hulking riffs and machine gun drums designed to cave in skulls.

The second half of the album gives life to two of the albums best tracks in The Thing (1982) taking its name from the John Carpenter classic, it’s a frenzied, bug eyed assault on the senses, much like the film its named after. It’s a late highlight that is my personal favourite here.

Their cover of Zombie Apocalypse by Mortician is another welcome moment that manages to update the original and somehow manages to sound even more sinister, if that’s even possible.

Overall Hell Unleashed is a welcome return for one of thrash’s best modern bands. This is an album that takes everything that made thrash such a beloved sub genre and turns it into an album that feels both classic and fresh. This album could easily sit alongside any album from the forefathers of thrash and give them a run for their money. Evile are a band reborn, with the fires of hell itself on their side and with this album, they just put everyone else on notice

Hell Unleashed is out now via Napalm Records