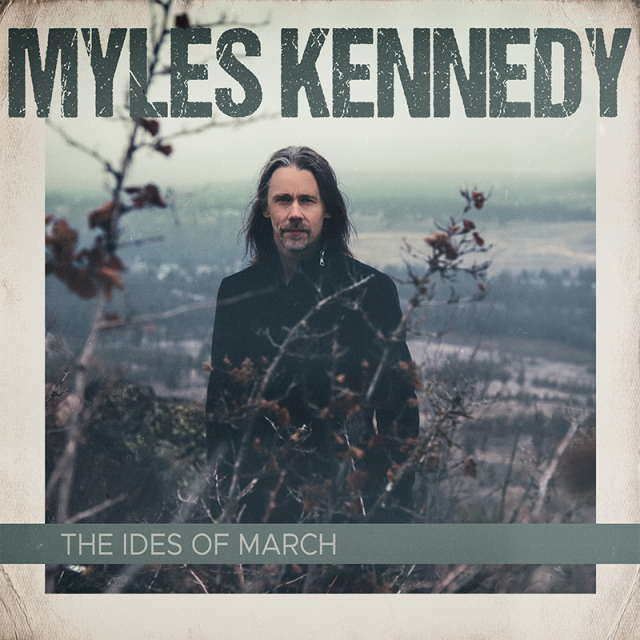 Over the last seventeen years, Myles Kennedy has gone from being a relative unknown, chosen by three quarters of Creed to head up their new band Alter Bridge to being one of rock’s most revered frontmen and singers. Three Years on from his debut solo album, Year Of The Tiger, world circumstances afforded him the time to lay down his second solo album (something Myles told us all about recently here at Rock Sins in a huge interview). The end result is The Ides Of March.

The start of the album is among the strongest of any album Myles Kennedy has ever featured on – Alter Bridge, Slash, Mayfield Four or his own work. Opener Get Along starts with a huge, almost bombastic riff and drum beat before delivering an important life message – “Why can’t we all just get along?”. This tale of not being too stubborn and headstrong for our own good also comes sandwiched with a couple of wonderful guitar solos, seeing Myles fully cut loose in the way one might expect his Alter Bridge bandmate Mark Tremonti to do. The main guitar melody underpinning the following track, A Thousand Words is very uplifting; It lifts one’s mood in ways that can’t quite be explained.

For pure rock n’roll good times vibes, The Ides Of March’s first single, In Stride, has to be one of the best songs of that style released by anyone so far this year. The monster chorus, the big bluesy main riff and the gallopy pace to the verses make it very easy to see why it was chosen to be the lead single (the music video for the track is also very good). So far, very good.

Unfortunately The Ides Of March as an album loses its way a little bit in the middle. The title track of The Ides Of March follows with another change of pace; A slower, semi accoustic number where Myles demonstrates his (always incredible) full vocal range. It has dark undertones and of all the songs on the album, it feels most like an Alter Bridge song, one that could have easily been on AB III in particular. It’s good, but its overly long and it kills the momentum of the previous three tracks somewhat as a result. Wake Me When Its Over and Tell It Like It Is adopt a similar approach to In Stride, but neither have the same level of hooks to them. Love Rain Down seems like it would have fit better on Year Of The Tiger than with the rest of this album and feels slightly out of place.

Moonshot is the point where things start to pick up again; Myles knack of portraying positivity through lived experiences shines through in spades on this song. Wanderlust Begins is a perfect song for 2021. The anthem for the weary traveller, tired of being stuck in the same place who wants to get moving once more, but with the message that “everything will be alright again”. Sifting Through The Fire returns to full blown high quality rock n’roll mode. Some great riffs with some lovely little additional guitar licks, and perhaps the song where you can feel the fire (pardon the pun) in Myles voice more than any other. Another track that lifts the listeners’ mood very well. The album closes with Worried Mind, a slow burning, soulful track with guitar work that feels like it could have come out of New Orleans, rather than Myles’ home of Washington State. After the gradual build, Worried Mind has a big finish, providing a fitting point to bring the album to a conclusion.

The Ides Of March overall is a very enjoyable album. It was clearly an opportunity for Myles Kennedy to experiment with a variety of different ideas that he didn’t think fit into either Alter Bridge or his work with Slash, and there are far more hits than misses here. It’s a shame that the album dips a bit in the middle, because what comes either side really is fantastic. It’s not quite a must have rock album for 2021, but it certainly is a must have for anyone who has followed Myles Kennedy’s career thus far – it is highly likely fans of his will get a great deal from the album.

The Ides Of March is out now on Napalm Records. Pick up the album and related merch at the Napalm Store.