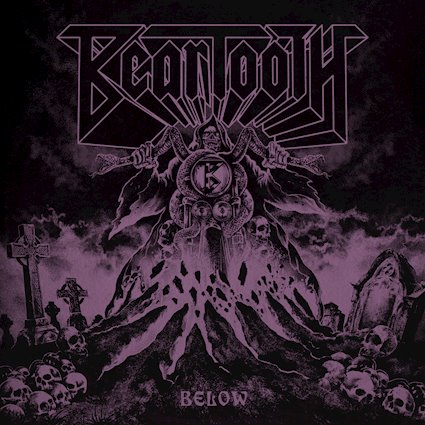 Not to be hyperbolic, but it has to be said, Beartooth are one of the most consistent bands in heavy music today. Since emerging they have released a string of albums, with each one managing to be better than the one before.

Below, their fourth studio album continues this trend in spades. I’ll be honest, this is the best album that Beartooth have put out,without question. As a counter balance, it may be the most exhausting of theirs to get through. You know what to expect from the band by now if you are a fan. Even with that in mind Below still manages to come as a bit of a gutpunch.

Caleb Shomo is still one of the most interesting frontmen from the modern heavy scene. He truly shines on what I imagine was another difficult album for him to make. As with a lot of the band’s output, this is another emotional bloodletting. Caleb in particular always seems like a man on the edge, and there are moments on here that really reinforce that.

Songs like Devastation, The Past is Dead and The Phantom Pain, all paint a picture of a highly distressed person trying to hold it all together. It’s these moments lyrically and vocally the album shines, as Caleb manages to switch from anguished guttural screams to soaring melodies with ease, and really shows the duality of his inner thoughts.

The band steps up to match the lyrical and vocal displays, meshing some of the heaviest grooves and sharpest riffs, with some of the most accesible moment they have ever created.

Skin is a perfect example of this, with it’s vulnerable cries about not liking who you are, it features an extremely hummable guitar line and a huge chorus that is destined to be reverberated around venue walls for years.

I think as we continue to put a spotlight on mental health and how we deal with it in this day and age, Beartooth will go down as a massively important band for music fans. Being both open and honest in interviews about the subject, while providing emotionally fraught lyrics that are incredibly personal, but extremely relatable, ensures their fanbase knows there is always somewhere to go, but it also helps to continue the conversation.

Beartooth are a band that have matured alongside of and in front of their audience. With Below it feels like they have made an album that showcases everything that made them such a great band in the first place, but it also feels like a love letter to their fans and the struggles they have battled and overcome together. It’s a highly potent, powerful and ultimately uplifting album that will leave you wanting to hit the repeat button over and over again.

Below is available on June 25th via Red Bull Records