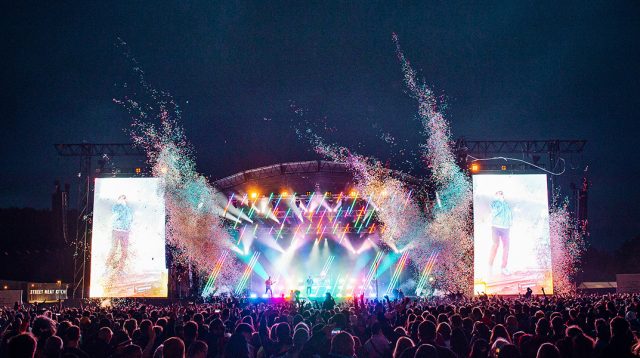 There were tears, cheers and plenty of beers flowing at what will be known as Download Festival’s historic pilot event, which took place 18th-20th June, with a reduced capacity of 10,000 fans and just two stages.

When the Download Pilot was announced we couldn’t quite believe it; live music was making a return with a showcase of some of the UK’s best rock bands and artists back at Download’s home – the UK’s spiritual home of rock and metal, Donington Park. While of course there was an immense feeling of excitement, we can’t deny that there was a sudden pang of worry which followed (I mean we are still in a pandemic). Thankfully our worries were put to the back of our minds thanks to the testing and measures put in place to ensure those who attended tested negative. (I am pleased to say that on returning from the festival, myself and others on the Rock Sins team who attended have tested Covid-free!)

On arriving at Donington Park, I walked onto the field in my essential festival footwear (Dr Martens boots) and instantly felt at home, you know that feeling when you walk over a festival field, in search of your mates and which stage you’ll find yourself at first? Yeh, that! When I was reunited with my music loving friends it was emotional – hugs all around and a big buzz from just being together at a festival again. We bumped into so many people that we knew, both Downloaders and those working within the music industry, plus met some new friends in the process of sharing this wonderful, yet crazy experience and within less than an hour of being in that field, it felt like the pandemic was just a distant memory.

Saturday treated us to an epic headline set from Enter Shikari with immense energy and confetti, kicking off with a fanfare edition of Live Outside, which vocalist Rou had teased on the band’s TikTok. (Check it out below.)

Ahead of their performance on the Saturday, we caught up with Janine and Hamish of Vukovi, who were more than a little nervous.“I’m shite-ing myself,” said Janine, who was full of hay fever, “I don’t know how I’m going to sing, I’m going to be out of breath!”

“It’s like going from zero to this,” said Hamish, “this will be like the biggest show we’ve ever played.”

We’re pleased to say that Janine did make it through her performance, getting close up to the crowd with her vodka, red bull in one hand and mic in the other. Someone who particularly enjoyed their set and came to chat straight out of the Vukovi pit was Milkie Way and Sam Matlock of WARGASM who made their UK festival debut at the pilot. “It feels like an out of body experience,” said Sam.

WARGASM were unleashed onto the music scene in 2019, just before the pandemic, some would say bad timing, but it actually seemed to work in their favour. “It’s a dark sentence but if someone was like you could magically click your fingers and Covid would have never happened and you could go back so you didn’t lose any time, I don’t think we could do that,” confesses Sam. “To be honest the strengths of this band and the songs we’ve got and the things people are really loving and enjoying, are things because this wasn’t thinking outside of a box, we were forced into a box.”

Other highlights of the day included performances from the likes of A, While She Sleeps, Twin Atlantic, Creeper and Bleed From Within, who’s performance was quite literally on fire! We caught up with drummer Ali Richardson after their set who told us that “it feels like it’s been the longest period of time, but also the shortest period of time… it’s a bit surreal to be honest, the fact that everyone is tested before they come in, and you’re in this little bubble, kudos to the organisers for pulling this off in such a short period of time, the audience were fuckin’ outstanding, incredible energy. It’s fucking good to be back.“

Sunday’s highlights included the legends that are Skindred and frontman Benji Webbe referring to the C*nt that is Boris, before the crowd filled with the bands’ signature move the ‘Newport Helicopter’, plus some kick asses performances from Cassyette, Saint Agnes, Yonaka, Lonely The Brave and Loathe (who ended their set acapella thanks to technical difficulties, which in our opinion made the performance even more special).

Saint Agnes were another band on the bill making their Download Festival debut and their feeling of festival familiarity came in the form of them not being able to find the right entrance to the festival. “Every band has the same thing, you’re like there’s the main entrance, but where do the bands go? It’s weirdly familiar so it was nice to have that kind of back to reality feeling,” said guitarist Jon.

“I actually didn’t find this all as weird as I was expecting, it feels a little bit like the last 18 months didn’t happen and we’re just back to normal, I thought I’d have more of a moment where I was emotional,” added vocalist Kitty.

Also fairly new to the scene is punk rocker Cassyette, who although had her first set lined-up for Sunday, actually made her first Download appearance on stage with Frank Carter during his headline slot on the Friday. “OMG, like what the actual fuck?! It was fucking crazy!,” is how Cassy responded when we asked about how it felt to join him. “We made this song together and then he was like Cas why don’t you come on stage on the Friday and I was like, really? Are you sure?”. Cassy’s nerves about performing at her first ever festival were put to rest by Frank “He was so amazing, Frank is just the best, he’s a fucking angel and he supports other artists so, so much.“

“The atmosphere was insane, everyone was so happy. This festival is genuinely the happiest festival I have ever been too!“

We couldn’t agree more with Cassy! The joy and passion for live music was felt throughout the weekend and although it was over within the blink of an eye, it’s one festival that we’ll never forgot. Even if you weren’t at the festival it felt like everyone was there with us, rooting for live music to make its return.

Thanks to the success of Download it looks like we’re on the right track, so let’s keep wearing our masks, get those jabs booked in and do everything we can to keep each other safe and see the return of live music!