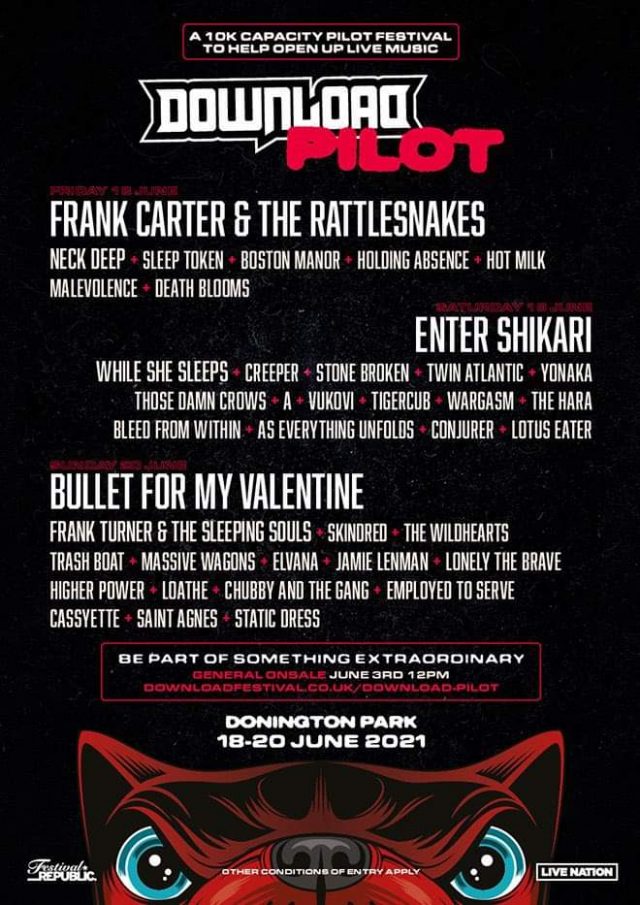 Following on from last weeks’ thrilling announcement that the Download Festival team were getting to run Download Pilot as part of the UK Government’s programme to restart the live music and live events industries – we now have plenty more info for you all.

The line up for the Download Pilot has now been confirmed! Headlining the pilot event at Download’s usual spiritual home of Donington Park are Frank Carter & The Rattlesnakes (Friday), Enter Shikari (Saturday) and Bullet For My Valentine (Sunday). That’s right – BFMV are finally headlining Download (albeit in a way no-one, including them, could have ever expected).

Alongside the headliners, Download Pilot will also see appearances from the likes of Boston Manor, Holding Absence, While She Sleeps, Conjurer, Sleep Token, As Everything Unfolds, Skindred, The Wildhearts, Frank Turner and the Sleeping Souls and more. A total of 40 bands will play the two stages of the Download Pilot over the three days of the event – June 18th – 20th.

“We’re incredibly excited to safely welcome back fans to Donington Park and honoured to play a vital part in the return of live music to the UK. Putting together a line-up of 40 outstanding bands including headliners like Frank Carter & The Rattlesnakes, Enter Shikari and Bullet For My Valentine, is something the Download brand is uniquely able to do and made possible by a thriving UK rock scene and deep pool of in-demand talent. With moshing back on the cards, this is going to be a true celebration of festival spirit and something special to be a part of.”

Tickets for the priority group (those who had purchased tickets to Download 2022 / rolled over from previous years) go on sale at midday 1st June (UK time) for a priority period of 48 hours. Links will have been sent directly for those eligible to access the the priority booking. General sale for any remaining tickets is at midday on the 3rd of June – information will be available at https://www.downloadfestival.co.uk/download_pilot.

Saturday: Enter Shikari, While She Sleeps, Creeper, Stone Broken, Twin Atlantic, Yonaka, Those Damn Crows, “A”, Vukovi, Tigercub, Wargasm, The Hara, Bleed From Within, As Everything Unfolds, Conjurer, Lotus Eater.