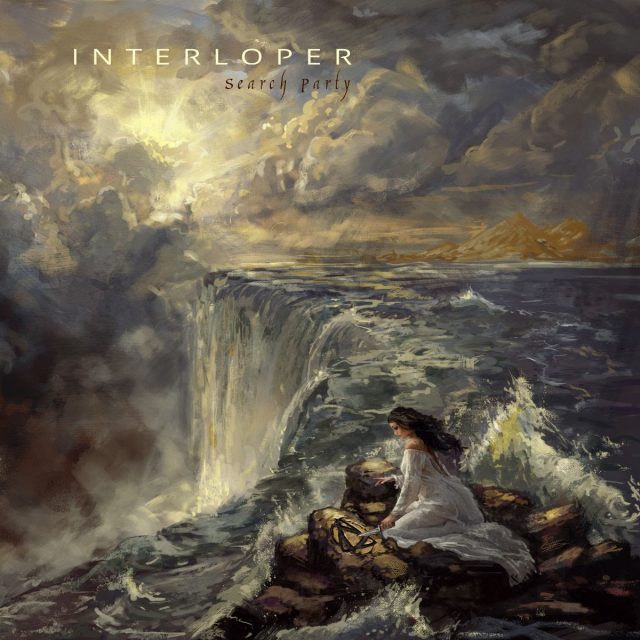 Overall Score: 9/10 Technical proficiency : 8/10 Variety : 7/10 Songwriting: 8/10 Pros: You'd be hard pressed to make a better first impression Cons: There are growing pains with songwriting but nothing that won't be ironed out with time.

Nailing your debut is a daunting challenge, no doubt. With all wares on the table, the pressure to deliver a lasting and genuinely innovative first impression is immense, only escalated when competing in an industry as forward-thinking as metal. Fortunately, progressive death trio Interloper bided their time and their first full-length, Search Party, is a testament to their patience; a stunning first look into their fully-formed vision. With the cogs turning since 2014, with multiple singles and an EP already under wraps, Search Party emerges to deliver a very belated yet very warm welcome to Interloper’s world.

Progressive music is often held as the cradle for creativity and novelty but growing concerns warn that the genre is slowly being populated by copycats and has seen very little ‘progression’. Having heard Search Party, you’d assume these were mere rumours. With just ten tracks and a fairly modest runtime, Interloper strives not to impress through sheer scale but, instead, snag the ears of all who listen by simply being fun and memorable; something that has recently seemed lost in the genre’s gene pool.

But how does this translate into a ‘sound’? Precise, balanced, powerful and, above else, heavy; that is how Search Party sounds. It’s technically proficient without being pretentious, it’s melodic without lacking bite, it’s concise yet not half-baked and crucially it retains the replay value it deserves.

This mainly comes courtesy of the band’s greatest tool; melody. Channelled through Andrew Virrueta’s seriously impressive pipes and supported by a battalion of ever-morphing chugs and squeals from himself and fellow axeman Miles Dimitri Baker (ex-Rings of Saturn), Search Party’s tracklist is a refreshing take on the art of progressive metal. While listing highlights seems redundant – with every track providing its own discernable flair – tracks like Drift, Cheshire and opener Pathkeeper strike as some of 2021’s most enjoyable progressive metal and will surely serve as launch pads for the band’s success.

As you may imagine, this is a dense tracklist. In almost ‘blink and you’ll miss it’ fashion (there isn’t really an equivalent phrase for audio) tempos and rhythms dart back and forth, guitar lines hurl themselves about the soundscape and Virrueta brings no mercy when flipping the switch from falsetto to a tectonic roar. As a result, Search Party needs a good few spins to truly reap the benefits of Interloper’s meticulous craft; but this merely attests to the depth of their composition rather than a critique of their vision’s clarity.

No record, however, would be complete without a robust production package and this is seen to wonderfully by Virrueta’s brother Joey. Considering the record’s love affair with strong, soaring hooks and two-faced guitar style, it’s only fitting that Search Party is a vibrant and kaleidoscopic sounding album which results in a visual listening experience that reinforces the striking imagery of Caelan Stokkermans fantastic album cover; a rare and refreshing feat for such newcomers.

If there are complaints they are mere nitpicks in the face of a very well-rounded package. Virrueta is, indeed, a very talented and capable vocalist but there are times where it feels he plays a little safe with his clean delivery and will need a little work before toppling prog metal giants like Caligula’s Horse’s Jim Grey or Leprous’ Einar Solberg. This, combined with the songwriting not always being at the height of their potential – The Wishing Well being a key example – does keep a perfect score out of arm’s reach for the trio but growing pains are all too predictable on a first outing; having room to grow is never a bad thing.

The headline is that Interloper has delivered at last and does so with conviction. Search Party is a glorious and memorable affair with beefy riffs and throat-straining chorus’ that would have no trouble sending ear-to-ear grins around a stadium-sized venue. Those with concerns for progressive metal’s future should ease their qualm, the future is in good hands and it sounds like it’s going to be fun.