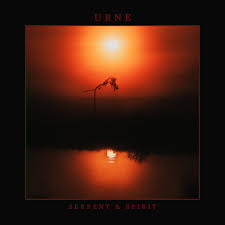 Overall Score: 9/10 songs: 9/10 riffs: 9/10 creativity: 9/10 Pros: A self assured, creatively rich debut from one of metals most exciting bands Cons: virtually nothing

The terms ‘Next big thing’ or ‘Ones to watch’ get thrown around so much,that the term has almost lost meaning. Usually reserved for trend chasers or mags looking to fill column inches. Every once in a while though, a band comes along that completely justifies the sentiment. Urne are that band.

Their 2018 E.P The Mountain of Gold was one of the most unabashedly heavy releases of the entire heavy and with it the band set a sky high bar for themselves. Fortunately with their debut full length they have well and truly knocked it out the park.

Serpent & Spirit is an album that just oozes confidence out of every pore. Listening to the album in full, you’d get the feeling this is a band on their third or fourth album not their first. They peel off sky cracking riffs with such ease and deftness that you’ll likely spend most of the running time wondering quite how they did it.

The opening track which is also the title track has such an otherworld isolated feel that I almost felt like I’d been transported to Arrakis and someone was asking me spice prices.

Desolate Heart thrashes along at a fair old clip,combining the best parts of Bay Area Thrash & NWOBHM in one 8 minute instant classic.  Other highlights include Moon & Sky, and the album’s epic closer Tomb So Frail.

Urne prove have produced an full of songs that prove metal can be expansive and grandiose without having to sacrifice any heaviness in the process. This a sprawling and at times innovative album that moves at a great place and feels huge from the opening note all the way to the closing ones.

Urne are one of the heaviest and most interesting bands to arrive on the scene in a very long time. With this album they have made their intentions and ambitions clear, and heaven help anyone that dares to stand in their way.