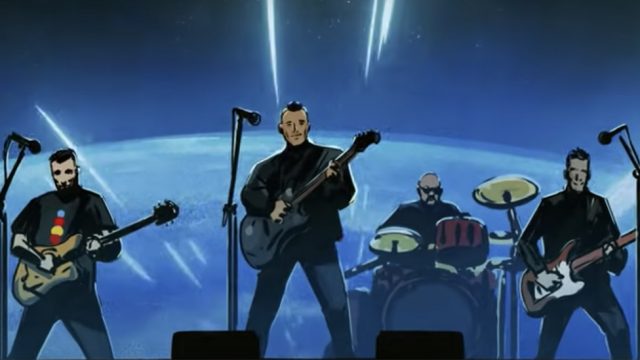 Marvel comics illustrator and artist behind the award-winning comic book The Secret of Nikola Tesla, Enis Cias collaborated with the band, creating something truly stunning that you won’t be able to pull your eyes away from. Following the creation of the art work Toni Huml took to animating the project, having worked on multiple award-winning music videos, animated short forms, and feature film VFX this is no doubt a match made in heaven.

Discussing the song, frontman Ed Robertson said, “It is about the distraction of modern politics coupled with the pressures of the 24-hour news cycle, which is so sensational, un-vetted and un-researched. It seemed like the Nostradamus predictions of new disaster were getting worse and worse, even after we recorded the song.”

With the music video, we’re told the story of the quintessential family watching the news, where the mother and father are hypnotised by the TV screen and the son by his phone screen. The screens are showing chaos and destruction in the 24-hour news style, with an antagonistic anchorman and aggressive advertising, complete with nods to films like Dr.Strangelove and They Live. However, the little girl sees past the screen and her spell is broken by the music of Barenaked Ladies. She becomes a part of the music and brings that joy back to the living room and liberates the hypnosis of the rest of her family.

Watch the video below:

New Disaster gives off a true origin story feel to it. With a building sound and obvious storytelling themes, it’s a track that would be fit for any super hero film. Combined with its gorgeous comic book art, theres so much to love and engage with. Taking on hotly talked about topics can be a challenge, but Barenaked Ladies seem to have created a hit track that will leave you thinking about more than just the music.