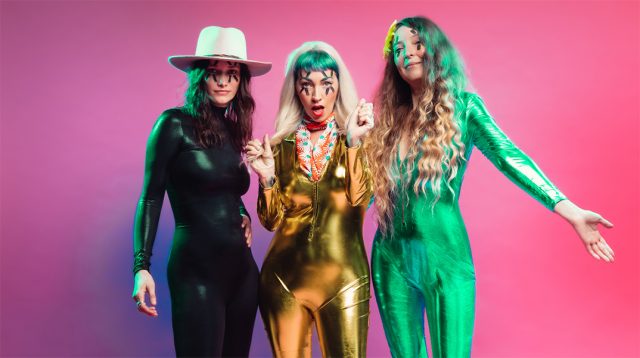 Nashville-based power trio, The Dead Deads have shared their brand new video for single First Tooth. The track will feature on their forthcoming album, Tell Your Girls It’s Alright, which arrives August 20th via Rumble Records. Combining elements of alt-rock, punk rock and metal into a distinctive blend, this trio will grab you and shake you about. With such a unique vibe, this track gives off something that everyone will enjoy.

While first starting to mix the record, it quickly became a favourite of producer Matt Mahaffey, likening it to a hard rock TLC or Lizzo. Talking about the track, drummer, McQueen Dead says: “It’s just one of those songs that has a hard swing to it – ;ike it would make you walk with more swagger if it was in your ear buds.”

Guitarist Meta Dead added; “When I was writing the lyrics, I was thinking about all the times I’ve been told I was ‘too this’ or ‘too that’ to amount to much. I finally realised the story is in MY hands, not theirs. Nobody is going to do the painful part for me.”

First Tooth will leave you feeling incredibly empowered and inspired to take on whatever is thrown at you, all while doing it in style. The song is a true power ballad that leaves you hungry for whatever the trio have to offer you next.

As a band The Dead Deads deliver metal and grunge riffs with a pop fashion thrown in. Laced with dynamic vocals ranging from sweet melodies and harmonies to screams and even the occasional growl. The result is incredibly punchy music that you’ll want to have on as loud as possible.

The forthcoming album is available for pre-order here and will feature 16 stellar tracks. If you can’t get enough of The Dead Deads, you can check out tracks Deal With Me , Hey Girlfriend and In For Blood.