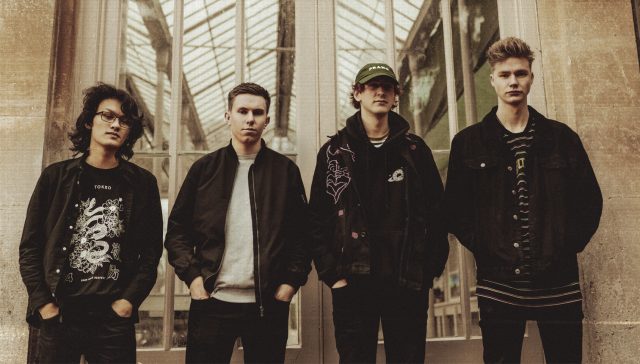 Beneath Flowers have today shared their brand new track, Roach, alongside a killer music video. Set in a worn down building, the video perfectly matches the eery atmosphere and lyrics throughout.

Exploring themes of disgust and different meanings, the post-hardcore band have taken care to match themes to the style of the video, which was filmed by Matt Higgs. For bassist and vocalist Scott Grantham, “it’s about a broken home, living with people you’re not happy with”, while for lead vocalist Tom Brooks it reflects aspects of the music industry and the discontent with the way it works.

Roach combines infectious guitar riffs with vocals that almost have a calming and luring effect, pulling you further and further in as the track builds up to a heavier ending. It’s hard not to be captivated by vocals that have a hardcore sound but feel delicate at the same time.

Watch the video Roach below:

Written before we even faced the first lockdown, the track became one of the few remaining songs from a selection the band decided to share upon reflection over the course of the pandemic.

“Roach was the only track that we just couldn’t let go. It’s a track we all worked really hard on and we’re all just super proud of it.”

Roach follows on from previous 2020 releases, Obsessive and Vertigo and the band are also currently working toward a brand new five track EP, produced by Daly George (Creeper and Boston Manor) and will feature Roach.

“We couldn’t have found a better producer to work with for the upcoming EP. We can’t say too much, but it’s shaping up to really showcase us as a band. It shows what we’re really capable of and it’s a body of work we’re incredibly proud of. We can’t wait to show everyone more of Beneath Flowers.”

Recently supporting BrokenTooth, the band made their return to live music by giving Roach its first live play. There’s no doubt the track will have you hooked and left wanting to hear everything they have to offer and more.

Beneath Flowers will also be playing this years CastleFest which has previously hosted the likes of Loathe, Blood Youth, Shvpes, Dream State and more.

If Roach has you hooked, you can check out even more music from Beneath Flowers below!