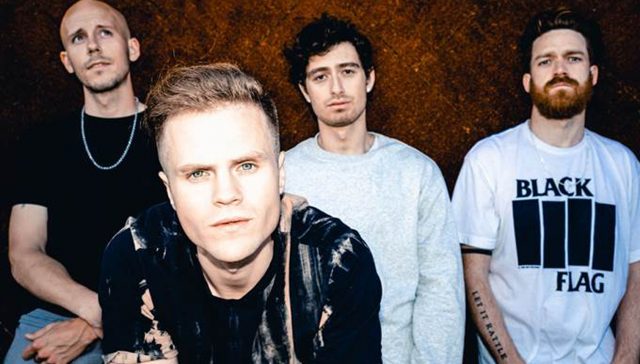 Formed at Berklee College in 2015, Dead Poet Society have been making music that is genre defining and defying. Creating a landscape of heavy riff driven tracks, to gorgeous ballads there is something for everyone to get stuck into. Not only does the music having iconic guitar riffs and catchy beats, but features the stand out vocals of Jack Underkofler.

Playing to the Reading Festival crowd that indulged in every second of their phenomenal stage presence, there’s definitely a demand for Dead Poet Society to be playing regular shows in the UK. Creating a sound that filled and overflowed the stage, it was a set that you would be gutted to have missed over the weekend and certainly felt like a hidden gem.

The band coming to the UK is something hugely exciting, and we were lucky enough to catch up with Jack and Will after their Reading festival set.

It’s your first time in the UK, how’s your time been so far?

Jack Underkofler: It’s been awesome, it’s a lot of firsts for us. The first time being here, the first time playing this festival, the first time experiencing extreme jet leg. We flew in on Sunday, so not a long time to catch up.. I mean we kinda kicked it in the ass. When we got here we knew we couldn’t sleep til’ the sun went down so we literally counted down the seconds til we could pass out.

Will Goodroad: Melatonin is great.

Yeah melatonin is great.. We learned that pudding is bread here. The desert pudding, like bread and butter pudding. Pudding is like a chocolatey, cross between jello and yogurt in the US but there’s no bread in it. We get caught up in these pudding conversations.

It’s exciting just getting to hear live music again, is there a favourite track to play live?

Jack: For me it’s probably .CoDA, the last song we play. It doesn’t matter if I do a bad job. You can go hard as shit and blow my voice out at that point.

What have you been most excited for about Reading and Leeds?

Will: Probably this whole weekend.

Jack: Literally just getting on stage.

Will: It’s tough to beat what just happened, but hopefully Leeds is just as good.

I’m super new to Dead Poet Society’s music, I checked it out ahead of the weekend and really loved it. For newbies like me, where would you say is the best place to start?

Jack: I would say, if you’re trying to ease into our music probably .AmericanBlood, Lo Air, and .intoodeep.. or .CoDA.. fuck I take that back, CoDA, AmericanBlood, and Lo Air.

Will: I’d only say .CoDA and Lo Air, they’re our most stand out-ish tracks.

Jack: I dunno I only say .AmericanBlood cus thats a little bit more alt.

Will: It’s a gateway song.

Have you got a moment where you’re on stage and it hits you like “Wow, It’s my job to do this?!“

Will: I love when Jack turns back with a big smile, that’s when I know the set is going perfectly.

Jack: Yeah there is a moment two or three songs in where I feel like a little fuckin’ school girl, just like THIS IS THE BEST THING EVER.

Where do you draw inspiration from when it comes to creating the music?

Will: Sorta a cosmic gumbo of things.

Jack: Yeah, a cosmic gumbo we like to joke about that. I dunno.

Will: We all come from different states, like he’s from Virginia, I’m from Minnesota, Jack and Dylan are from the East Cost, New Jersy and New York, so we all have different backgrounds of what we listened to growing up.

Jack: We have direct influences, they tend to be a lot of modern bands. You know Royal blood are one of my favourite bands of all time. They’re so fucking good. Their first show in the US, I think ever, was in Brighton bar, in Boston Massachusetts and our guitarist had just showed them to me on the way to a band practice and I was like yeah they’re okay. He was like they’re playing next week, do you wanna go? And we went there and there was maybe like 50 people in the crowd. I was like oh okay this is my favourite band now. Then they came back like a year later and were opening up for Foo Fighters at Fenway stadium so that was amazing.

Is there anything exciting fans can look forward to over the next year or so?

Will: Yeah writing a load of new music and more shows.

In the UK or over in the states?

Jack: In the states, you know we haven’t let off the gas since we ended the album.

Jack: Yeah we’re coming back for download in June [2022], we’re just writing as much as possible. With Covid we just couldn’t tour throughout the album, so it was like let’s just keep writing and get album two out as fast as possible.

Will: We’re also shooting a music video out here next week!

Jack: Yeah its for a song called .SALT so that should be a lot of fun!

You can check out the bands latest release below and get stuck right in to the beauty that is Dead Poet Society. 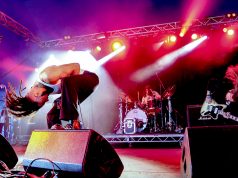