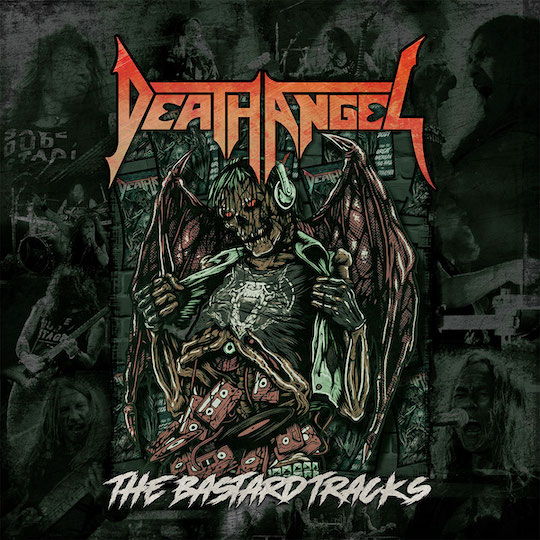 Overall Score: 8/10 Production: 9/10 Tracklist: 7/10 Performances: 8/10 Pros: Another heartfelt love letter to loyal fans of this rather underrated band. Cons: It's own weight is made more obvious by some dodgy tracks and the odd rough performance.

The pandemic brought the world’s global music scene both to a halt and to its knees. But, with Covid’s colossal weight stacked on its shoulders, the music industry was forced to forge a new path where the trodden one was no longer an option. With creativity and a will to keep music alive, we saw lockdown livestreams (that Code Orange stream was a feat like no other), exclusive pandemic projects alongside urgent calls to arms like the Music Venue Trust’s initiative to save the UK’s grassroots venues. In the case of Bay Area veterans, Death Angel, the spark was kept well ignited off the back of 2019’s Humanicide with a ferocious quarantined performance of deep cuts and hidden rarities or “Bastard Tracks” as the band has so lovingly labelled them. Such a live riot now returns under that very moniker in album form; a celebration of strength in adversity, persistence and decades of great music.

Live albums of this nature have always, to me at least, been largely indicative of the band’s own longevity and stature within their respective genre and yet, despite DEATH ANGEL being there and getting the t-shirt 10 times over, they’ve tended to fall into obscurity outside the loyal wolf pack. Even as a generally accepted member of thrash’s ‘alternate big 4’ – with EXODUS, TESTAMENT and OVERKILL making up the numbers – these angels of death typically fall to the wayside when push comes to shove.

However, The Bastard Tracks is further proof that those who remain loyal shall be rewarded. The reward itself is a whopping 15-track ensemble of the band’s most deeply ingrained roots stretching as wide as 1988’s Frolic In The Park to the most recent quakes of Humanicide proudly presented with ageless performances (particularly from vocalist Mark Osegueda) and a tangible production masterpiece from Ted Jenson that brings the chaos rumbling through each and every fibre. It’s a work of refined dedication that matches the band’s fans’ own steadfast allegiance; a thoughtful love letter as opposed to throwing the wolves a pitiful bone.

So, with an established concept and good intentions behind it, the question that remains is whether the neglected gems in this treasure trove are worth their mettle (*insert obvious pun*). Was it worth the labour heaving them from beneath the sunken carcass of anonymity or are they better off stranded in the deep? All-in-all Death Angel have assembled a package worthy of their legions and newcomers alike as their forgotten history is laid bare. While the quality of most tracks, and their respective songwriting, have spoken for themselves for years, the performances are where The Bastard Tracks rescind their damning title. The thrash ‘n’ bash crash course tracks like Lord Of Hate (Killing Season), Fallen (The Dream Calls For Blood) and 2019’s Alive and Screaming (Humanicide), in particular, is where the ensemble reaches its peak with all knobs turned to 11 and seemingly no sign of wear and tear from a band rocking hard into their fourth decade.

The two-prong assault of lead guitar and vocals courtesy of Rob Cavasteny and Osegueda, respectively, carry the same malice and vitriol that propelled them into the limelight in the 80s with time having aged them like a fine malt.

Now for the sake of retaining engagement across 15 tracks, I realise it’s crucial to pop the odd palette cleanser in to relinquish the head trauma of 200bpm riffs. This, however, presents the record’s only bugbears; Volcanic and Faded Remains. As the record’s only two moments to gasp for air it seems odd to clump them both back to back in the final quarter but odder still that they were chosen at all – Cavasteny’s lead vocals are unfortunately anything but Volcanic and Faded Remains is still plagued by the stilted melodies that cursed its birth in 2020. Whilst it may not be a fatal blow, it certainly kills the album’s rapid momentum and gives two excuses to hurriedly hit the skip button; not to sound ungrateful, of course.

Death Angel has earned the right to celebrate their neglected creations time over and, by extension, deserve to be lauded with the same enthusiasm as their equal contemporaries. The Bastard Tracks is a fantastic little homage to some forgotten favourites – give or take a couple – for one of metal’s too easily forgotten legends; the pack has spoken.