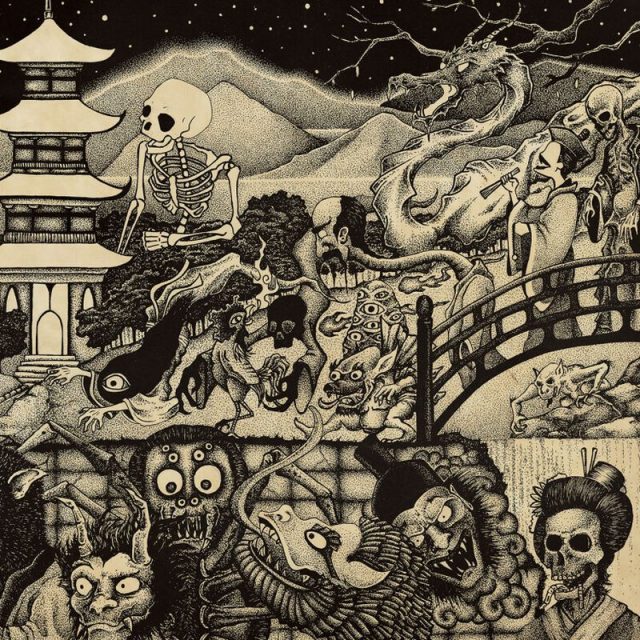 Overall Score: 9/10 Original Earthless Vibes: 10/10 Tracklist Economy: 10/10 Ghoulish Artwork: 7/10 Pros: The Earthless we know and love are back! Cons: Not many… maybe another track for the D-Side?

Earthless are the leading modern-day supplier of riffs and super-long jams. Their latest album Night Parade Of One Hundred Demons only goes toward further cementing that status. The space-rockers are back with carefree songs and there are none of those unnecessary vocals to be found.

2018’s Black Future was released to luke-warm reviews. Shorter songs and vocals didn’t wash with hardened fans. Nor did it win many new ones as it jostled for position amongst the more conventional stoner/desert/space rock albums from that year.

With the band citing geographical reasons for not being able to play together to create longer tunes; you can’t help but wonder whether the Nuclear Blast debut pressured them into the mainstream way of doing things. Similar to Karma To Burn when they signed to Roadrunner. We’ll probably never know, but one thing we do; Night Parade Of One Hundred Demons is a red hot return to form.

Earthless give us an hour of new music spread across three tracks. The first two tracks are the same song but parts one and two. If you’re spinning the vinyl, Side A and Side B are only two tracks. Earthless mean business here.

Night Parade Of One Hundred Demons is inspired by ancient Japanese legend. The mythology speaks of hordes of demons and ghosts coming out once a year to terrorize and ultimately kill people. Check out the artwork for some sort of idea on how that looks. This all appears and sounds pretty creepy and that filters through to the music. It’s not all goofy rollicking riffs and Tony Hawk video game soundtracks here.

A tribal-style drum rhythm drives the music in many parts which sounds slightly outside of the familiar Earthless pleasure zone. However, the screaming guitar and rumbling bass all explode in a style that we are well accustomed to. After the doomier and more melancholy periods there are always euphoric eruptions of pure stoner jamming. The driving rhythms and endless solos are still out there in the musical cosmos to get lost in.

The two parts to the title track are wonderfully laid back and unrushed, but when they stir into life they certainly don’t hold back.

The big finale of Death To The Red Sun blows in after the demons have dispersed. The title sounds like a stereotypical desert rock tune. With the aching feedback and low bass rumble that opens… it is a stereotypical desert rock tune. If that sounds like a negative, it isn’t. If you were to dream up how a new Earthless song would ideally sound, then this is it. The soaring lead guitar slices through that galloping low-end while Mario Rubalcaba pounds away at the drums on what must be a never-ending workout.

Death To The Red Sun is a perfect piece of over-the-top desert jamming you are likely to hear this year.

Night Of One Hundred Demons is not only a much-appreciated return to form for Earthless but rather a benchmark in the rich tapestry of their back catalogue. It’s early days to claim such things, and there is some stiff competition, but this could be Earthless’ finest work to date.

Night Of One Hundred Demons releases January 28 via Nuclear Blast.