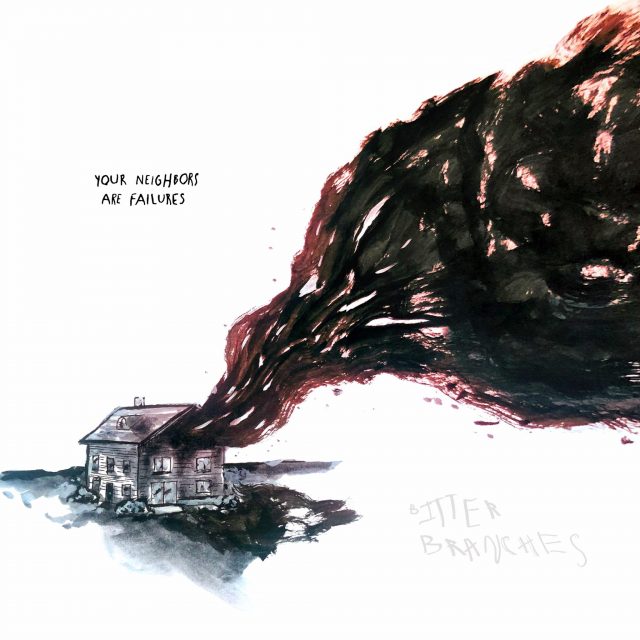 Overall Score: 7/10 Song Writing: 7/10 Musicianship: 7/10 Overall Production: 7/10 Pros: It's an aggressive heavy hitter Cons: Some of the songs meld into each other

Genesis said it best: “this is a land of confusion“. With so much to navigate over the last few years and World War Three seemingly at our doorstep, there is only more uncertainty to be found. This breeds universal frustration and contempt. Pushed to breaking point, hardcore outfit Bitter Branches release Your Neighbors Are Failures tomorrow.

The supergroup made up of members from Lifetime, Calvary, Walleye, and Lighten Up! channel their frustration into their first full-length album. Bitter Branches offer up ten tracks fuelled by pure aggression.

“Let’s get some lipstick for this pig” Tim Singer states in opening Along Came A Bastard. A play on the famous idiom, this song makes no such attempt to hide their fundamental values. Blood curdling screams tear through Matt Ryan’s jagged punk inspired riffs. Punk and hardcore have been a life-long vessel of anti-authoritarian messages and Bitter Branches prove to be no exception to this. Spoken word passages bordering on tangents litter the song and open the door to a menagerie of rants and battle cries.

Though this isn’t an album entirely comprised of outward hatred. The Man Who Never Cries’ introductory chaos threaded together by Dan Yemin’s heavy bassline fools you into believing this will be more of the same. Yet Ryan’s melodies slip through the static and paint a dreary picture. We join a man at his breaking point. “Pain is living” Singer muses, highlighting a malady many of us have been feeling on a regular basis. “Please don’t leave” he continues as the instrumental beneath his voice picks up the pace. The juxtaposition of an upbeat instrumental against the sound of a mind falling apart allowed the lyrics’ weight to blindside us. “Someone open the window so I can jump” does indeed blindside us, the way a train would if we strayed onto the tracks.

It’s this lyricism which feeds into the possibility this rage is something else entirely. The melancholy Plastic Tongues feels reminiscent of Soundgarden’s Black Hole Sun. This grunge twist doesn’t last for long however as Jeff Tirabassi’s drums drag us into bubbling guitars. A change in momentum pushes Singer’s delivery to become more animated. It comes to the point where the message of the song changes entirely. Despondency becomes resilience as Singer states “you can end this, you can take the mask off”. Going into Have You Tried Jogging, we see this resilience is fuelled by a sense of bitterness. The bassline dominates the instrumental. While there are elements of comic relief within Have You Tried Jogging, the prickly nature broils beneath the surface. “You’re selling someone else’s story with borrowed lines” sounds like an attack on our false sense of individuality.

Individuality and autonomy as we know it frequently come under scrutiny. Sorry You Are Not A Winner becomes a long list of ways we as people are not enough to our overlords. Our wallets, our pleasures, our societal contributions, and our actions are left in tatters as our good intentions are beaten down by the system. While some would become downtrodden by this, Bitter Branches transform that insecurity into an aggressive outro, rallying against that which oppresses us. Solo Trip doubles down on this ideology as Bitter Branches encourage us to live our own lives rather than “walking a mile in someone else’s shoes”. The chord progression’s matching of the vocal delivery hammer the point home: don’t give away your power.

In a time where heavy and aggressive music is king, have Bitter Branches done enough to stand out from the crowd? Yes and no. They have a very clear spite towards the way society and the world at large works. With songs such Circus, we’re treated to an auditory representation of the lengths rage can take us to. Monsters Among Us shows how anger can simmer and breed shame. We’re given a crystal clear depiction of rage but we’re also at times preached to. It’s this feeling of being shamed which makes us uncomfortable and tune out. That’s a disservice as this album is by no means bad. It may not change the field of play in terms of the heavy music landscape, but it can serve as a heavy hitter under the radar.

Your Neighbors Are Failures releases February 25 via Rude Records.

For more information on Bitter Branches, like their official page on Facebook. Also stay tuned for our upcoming feature with the band.