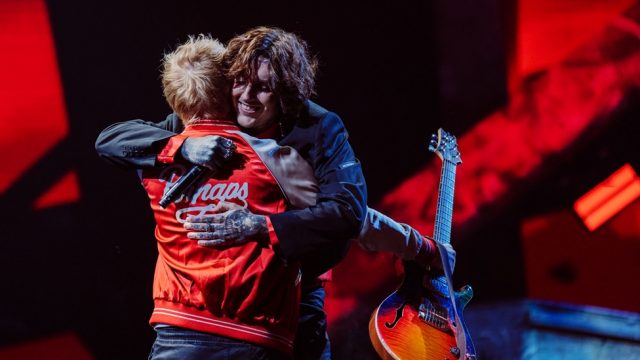 The 2022 BRIT Awards, the UK’s premier music awards ceremony, kicked off on Tuesday night with an explosive performance from Bring Me the Horizon, collaborating with none other than pop megastar Ed Sheeran.

After a brief opening sequence from host Mo Gilligan, the unusual pairing kicked off proceedings with a raucous metal rendition of Sheeran’s hit single Bad Habits, with BMTH frontman Oli Sykes adding furious harsh vocals to the track. The performance was met with shock and praise online, although some Ed Sheeran fans found themselves bemused at the man “shouting along to Ed Sheeran”.

Others saw comparisons to the infamous final performance of acid house pioneers The KLF, who opened the 1992 BRITs with a grindcore-tinged rendition of their number one hit 3am Eternal alongside Extreme Noise Terror and Napalm Death’s Barney Greenway – after which they notoriously fired machine gun blanks at the crowd and retired from the music industry altogether. The fact that these performances occured exactly 30 years apart may suggest that tonight’s performance may have been a subtle homage to the chaotic duo’s swansong.

Sheeran is no stranger to heavier music though. In past interviews he has expressed his love of Slipknot and Cradle of Filth, and has even been in contact with Dani Filth about a potential future collaboration, according to the Cradle of Filth frontman. Whether or not this is an indication of Sheeran’s future plans remains to be seen. For Bring Me the Horizon’s part, the quintet have just released a cover of the song Moon Over the Castle for the video game Gran Turismo 7, which you can listen to here.

What do you think of the performance? Let us know in the comments.