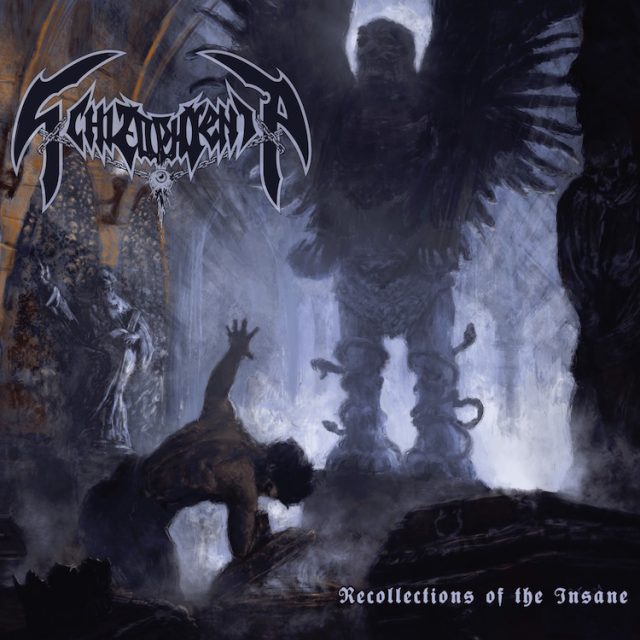 Overall Score: 8/10 Relentlessness: 9/10 Guitar Tone : 9/10 Indecipherable Logo Rating : 7/10 Pros: An absolute headbanger of an album from start to finish. Cons: The band do exactly what it says on the tin, there aren’t too many surprises but it’s top quality nevertheless.

The opening throes of Schizophrenia’s debut album Recollections Of The Insane are buzzing with screeching feedback and pick-scrapes that resemble revving car engines in the build-up to a drag race. It’s not long before the band have their foot to the floor. We’re off… and we aren’t stopping.

2020’s Voices EP introduced us to Schizophrenia in no uncertain terms. The Belgian four-piece deal in fast and heavy material, mixing the bludgeoning brutality of death metal with the frantic assault of thrash. Both death metal and thrash metal are delectable on their own but sublime when mixed together. It’s a death-thrash cocktail served cold and packing a mighty punch.

Schizophrenia don’t waste much time on atmospheric intros or moody passages that build up to ferocity; they hit you with an unstoppable barrage of heaviness. Flying through songs at Mach-2 with your hair on fire is all well and good but these have to be memorable songs. Thankfully Schizophrenia have no shortcomings in the craftsmanship of Sea Of Sorrow.

The band do exactly what it says on the tin, there aren’t too many surprises but it’s top quality nevertheless.

Although it seems like Recollections Of The Insane is zipping by relentlessly, there are lots of opportunities for the individual elements of the band’s sound to flourish.

Inside The Walls Of Madness starts with an explosion of noise but soon gives way to a gorgeous crunchy tone that deserves to be heard stripped out from the background chatter. Throughout the album, Romeo and Marty trade off buzz-saw riffs and euro-death solos which will keep you headbanging to the end.

While this album is a guitar enthusiast’s wet dream; there is no slacking from any corner of the band. As you would expect from an LP on the death metal side of things, Lorenzo’s drums are relentless and pummel you in the chest for the duration. Ricky Mandozzi takes on bass and vocal duties, setting himself a difficult task. It’s hard to do a guttural roar at the pace of Schizophrenia’s music. What we get is a compromise but one that works perfectly for the band: a mid-depth roar with a slight thrash bounce. Vocals which conjure up the horrid death metal mood but are able to keep up with the riffs without sounding rushed.

It should be said; Schizophrenia aren’t doing anything unique here. Enforced were lauded for their output last year and before them Power Trip were leading the way with their particular brand of brutal thrash too. Schizophrenia are perhaps more concentrated on the death metal arena than the aforementioned bands and their European roots inherit them a natural nod to the old school Stockholm sound.

If you are expecting Schizophrenia to end the album with a more reflective number, you’d be wrong. Stratified Realities is just as hostile as what came before until someone finally hits the fade button to bring it all to an end.

Clocking in at 44 minutes and spread over 9 tracks, Recollections Of The Insane delivers exactly what we what from Schizophrenia after their initial EP. We get timeless, straight-forward but hugely enjoyable chunks of death-thrash that ooze with youthful enthusiasm for heavy music.

Recollections Of The Insane releases on February 18 via self-release.