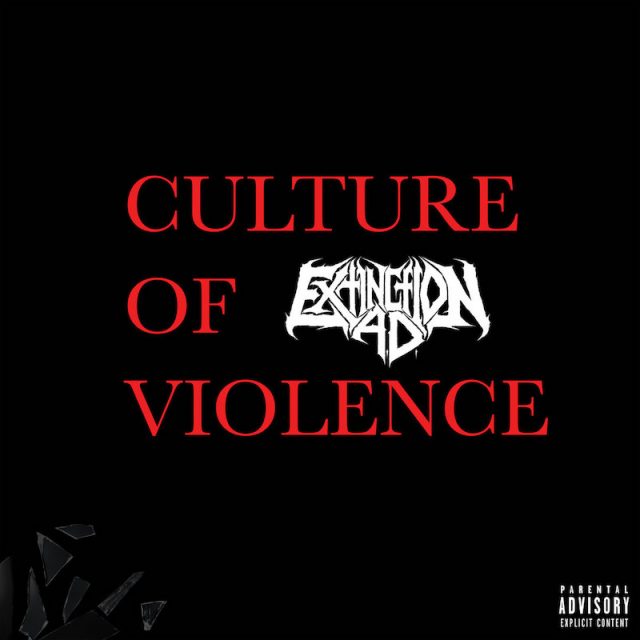 Long Island’s Extinction A.D. are back with their long-awaited full-length release, their first since 2018, Culture Of Violence. The band have released a flurry of EPs over the past few years and have been refining their sound up to this point where they claim “This is what ‘XAD’ is all about!”.

Extinction A.D. are a snarling, brutal and downright sour-faced outfit. Mixing up everything from thrash, death and some good old locally produced New York hardcore, they come out punching and rarely pause for breath. Frontman Rick Jimenez has a delivery that Jamey Jasta would pop a few veins in his neck replicating and he spews his bile all over these ten angry tracks.

Although Extinction A.D. are a heavy barrage of noise to contend with, the twin guitars allow the tracks to soar off into some splendid solos and Extinction A.D. have more to them than just slapping riffs. There’s a musicality to this output that puts them ahead of your average hardcore band. Pushing that further, you’ll find some upbeat singalong pieces on the likes of Star Strangled Banner. It’s not a happy track, but a little lighter than the average slab of Extinction A.D..

However pleasant that little ray of sunshine is, it’s the breakneck stuff that this band really excel in. Recent single 1992 is certainly up that street. Keeping things a basic, it’s a three-minute walloping rant of fury.

Extinction A.D. describe Culture Of Violence as “a heavy experience and a savage interpretation of what we’ve all witnessed and experienced over the past few years.” They’re not just talking about having to wear a mask at the shop either. Social commentary is their game and indeed, Heads Will Roll if you decipher the lyrics. It’s bareknuckle angry stuff just as we expected.

As for that earlier quote; there are no seismic shifts in direction here. The band may be at a point where they are recording what they feel is their best work on subjects they want to cover. From a fan point of view though, it’s just a very good Extinction A.D. album. There’s not a lot new to report.

Culture Of Violence is a hammer blow of material from Extinction A.D. The barrage of hardcore attitude is sliced up neatly by those more classic guitar flourishes and even a bit of groove here and there. It’s not going to change our world, but this album is a great listen and a chance to grind that neck vertebrae into dust along with this collection of violent anthems.

Culture Of Violence releases on March 18 via Unique Leader Records.