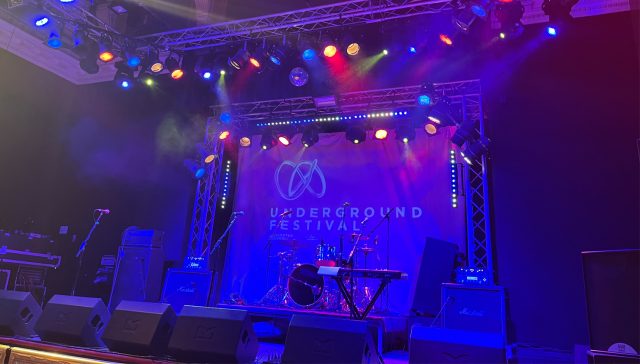 Gloucester’s Underground Festival returned on March 26th with 30 bands across four stages and three indoor venues. With the weather on their side and free admission to the festival, the stage(s) was set for a brief taster to wet your appetite for what is to come in the summer once festival season gets underway.

With the exact kind of energy that you want from a band kicking off your day of music, Cult Trexy brought the bounce. Their elastic guitar and bass work has the floor of the Guildhall shaking from the off and it’s that feeling that is like a welcome home rug for this festival. Though their style of conscious punk/hardcore, with some Limp Bizkit groove in there for good measure, would definitely be more at home in a wall-to-wall claustrophobic venue, they did a good job of filling that empty space and could easily play higher up the bill once they have more material.

Over at the Blackfriars venue, which is one gorgeous stage to play on, were Home Counties. A brilliant band to just stumble into with no prior expectations, their set screamed fun from start to finish and it’s this element that makes them a perfect band for festival bookers. Every track bubbled over the top with creativity and each member of the band felt so invested and integral to the songs that it transferred into the audience. Playful to the point where it’s almost funny trying to guess where they’re going to take the track next with a mix of Bowie-like keyboards, gang vocals across the board and lots of additional percussion. Though at points it’s like music that would play over the speakers in Willy Wonka’s Chocolate Factory, it’s far smarter than that makes it sound with some really clever arrangements and astute lyrics. The ability to take all of this and still have it be engaging for audiences with no previous engagement with the music is a great thing.

Following Home Counties on the Blackfriars stage were psychedelic rock trio Pale Blue Eyes. Lowering the tone into something more mellow, they glided through their set with the audience taking in the atmosphere of their material and the surroundings. The highlights of the set came in the more expansive and free-flowing sections where the chemistry between the band came to the forefront as they played off each other. The more subdued parts of the set created this serene environment that was interesting but not as engaging. When the restraints came off, it felt like watching a band jam together with the crowd being a fly on the wall of a practice space and that kept the momentum moving forward.

Back over on the main stage at the Guildhall, October Drift got the final stretch of the day started with an energetic performance. It’s at this point in the day where you see the experience of playing all types of venues with all types of crowds. Each member of October Drift didn’t just play their part, they performed it from start to finish, constantly demanding attention from the audience with their own actions. The music itself didn’t do a whole lot to win people over, feeling like fairly by the numbers pop-rock that didn’t have a lasting impact. That being said, they are sure to win fans over and convince them to check out their music after the show through their performance alone but the material most definitely played second fiddle.

The most prominent thing to address with Static Dress is the image and feel of the band. For a relatively new band, they’ve got the full package approach that you need to make a real impact. From the stage entrance to the way they look on stage, Static Dress knows exactly who their audience is and what they want and that’s clear to see in the venue when a large portion of the crowd showed up to see them and only them. Their image reflects the music as a combination of the styles that have dominated everything from metalcore to emo to punk. Some of the more cinematic elements don’t get as much room to take hold in the live show as they do on record, resulting more in a combination of hardcore verses with some pop-punk/emo choruses. The heavier sections pack a punch but the other side of that coin, the big singalong choruses, aren’t as well realised just yet. There is definitely a band there that once they nail both sides, they’ll pick up fans like a convoy and to some extent, they’re already going down that route with the interest that they’ve generated despite only having an ‘album’ that clocks in at 15 minutes. To capture what they have at this point in the band’s career is an impressive achievement though the complete package of Static Dress is just not as well refined yet in the live environment.

Closing out the day as headliners on their last UK show before flying across the pond for their first US tour was Cardiff’s Holding Absence. Off the back of their incredibly well-received 2021 album The Greatest Mistake Of My Life, they’re a band that has kept that momentum going despite not being able to play shows after releasing the record. Though it’s fair to say that Static Dress’ demographic left the venue before Holding Absence took to the stage, the room could have been 1000 people strong in the way they grabbed the room from start to finish. In the way that this festival has been headlined by other post-hardcore leaning bands that have gone on to front the current Brit-rock scene, Holding Absence are the most convincing of the lot. Despite only having two full albums and some singles to pick from, each track in the setlist feels essential and goes down a treat. From the bounce of Afterlife to the emotion and drama of Wilt, there’s real substance here to back up the hooks upon hooks.

Despite a lot of the tracks in the set using a similar pattern of slow verses to set up a big explosion into a catchy chorus, it’s done so well that it’s never too repetitive or predictable. That’s mostly down to the performances of drummer Ashley Green and singer Lucas Woodland. Both of them together make every second feel so vital and on the verge of giving way to another huge break. Green’s ability to make those tempo shifts hit just as hard as the last one stops the crowd from being burnt out after riding that rollercoaster for a second time. His counterpart in keeping you hooked into each and every second is Woodland who is one of THE vocal talents to emerge from this scene period. A great display of control allows him to flow through the momentum shifts whilst carrying so much emotion into each word.

After several big line-up changes to the band, Holding Absence since the release of The Greatest Mistake Of My Life feels like a rock-solid unit again. With a 45-minute set that feels impenetrable, their performances left no unanswered questions. Would the event have been even better if it was full of people who had turned up purposefully to see them, of course, it would’ve, these songs deserve that. That’s not to take anything away from the band themselves though who through performances like this, will be having much larger crowds eating out of the palms of their hands in no time at all. 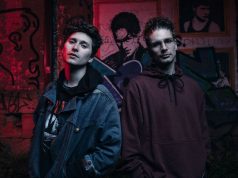 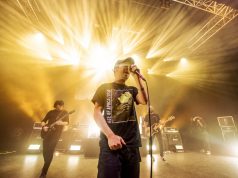 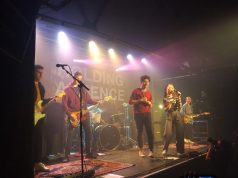 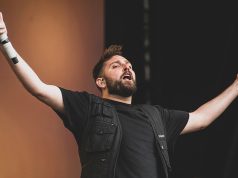