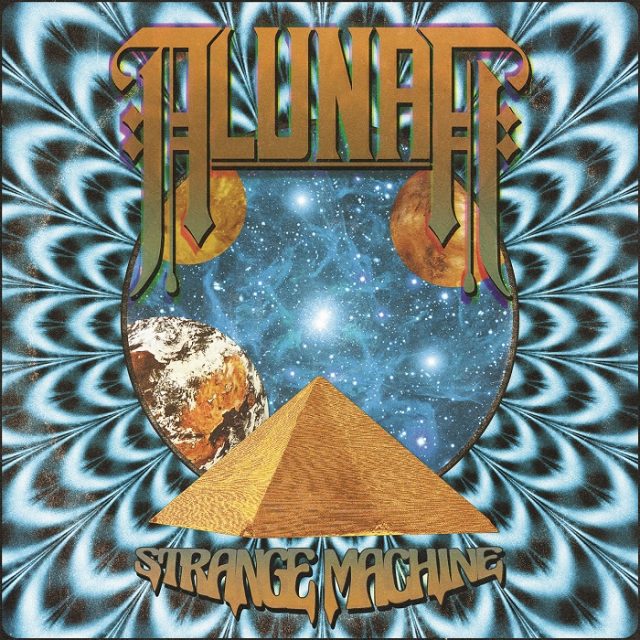 Overall Score: 9/10 Dirty Riffs: 10/10 Psychedelic Artwork: 9/10 Song Variation: 8/10 Pros: The Alunah we love but more rugged and care-free than ever! Cons: Let's keep the wind instruments to a minimum, yeah?

ALUNAH are crash-landed their Strange Machine into the middle of 2022 and it has made quite an impact. The Birmingham based quartet have released album number two with Siân Greenaway on vocals and this is the first with Matt Noble on six-string duties. It’s also the second album to be released by Heavy Psych Sounds, where the band seem to be more at home than ever alongside genre heavyweights such as NEBULA, STONER and Acid Mammoth, to name just a few.

Before we delve into the glorious music that awaits us, let’s just take a minute to appreciate the album artwork. Mariano Peccinetti has absolutely struck gold with this one. An ancient pyramid, flying out of some seriously trippy psychedelia into some far away galaxy? Coupled with the insane splatter vinyl cooked up by Heavy Psych Sounds, this album certainly looks the part. As a very wise man once said… “Psychedelic Baby!”

So, let’s jump onto the Strange Machine. We’re instantly greeted with some big dirty riffs and a guitar tone that is gravellier than we’re used to. The title track is just one example of many on this album where Matt Noble makes his presence felt by delivering some towering riffs. Tracks like Over The Hills and Broken Stone feature some scorching guitar work and if that isn’t heavy enough then check out The Earth Spins which features Shane Wesley (CROWBAR). This is heavy from Alunah, and we like it.

Hold up though, because this isn’t a story about ALUNAH getting a bit heavier. This is about Alunah spreading their wings and covering plenty of ground over this record. In a genre where everything can all sound a bit familiar, variation isn’t always encouraged. But, relatively speaking, ALUNAH travel around the doom-psych arena on Strange Machine.

Psychedelic Expressway is far from heavy. It’s a vintage sounding dreamy, vocal-led number that goes a little JETHRO TULL, especially when the flute kicks in! There’s no woodwind on Silver which is a speedy driving rock song that gallops along at a pace that we’re not used to from ALUNAH.

Don’t you love it when an album gets better as it goes on? Strange Machine is certainly not frontloaded with a couple of good tunes and then a load of filler; it’s quality from start to finish. The final brace of songs is a strong as any. Teaching Carnal Sins starts off with a loose jam on guitar before Greenaway hits with full force and those epic riffs return. Greenaway is again at her forceful best on the stomp of Dead Woman Walking, which rounds off a superb album with a mighty crunch.

Strange Machine is a superb album that owes a lot to Alunah’s desire to push their boundaries a bit more than on any previous releases. Greenaway switches personality across these songs numerous times, ranging from vocal powerhouse to quiet as a mouse. The riffs are truly a delight but the whole band seem onboard with leading ALUNAH down a few different roads on this album; and they’re a better band for it.