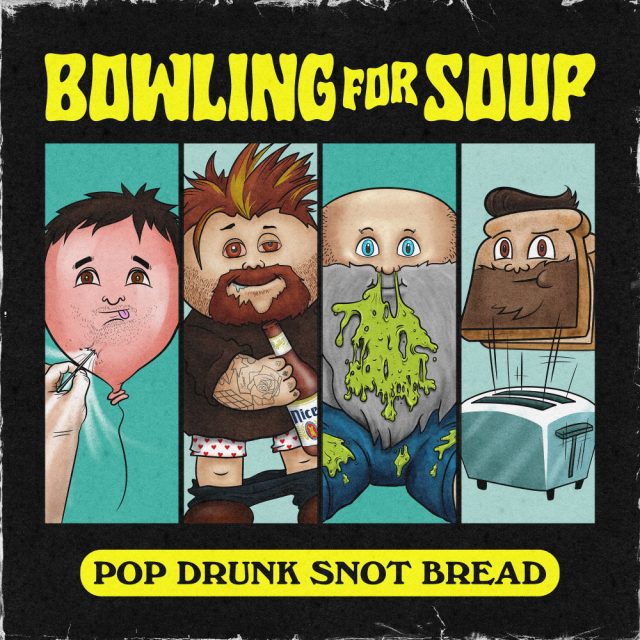 It’s been six years since BOWLING FOR SOUP graced our ear holes with a new record, and it’s fair to say a lot has changed within the band in that time. Their latest album Pop Drunk Snot Bread (a very clever play on words there) bears the weight not only of expectation, but reflecting what BOWLING FOR SOUP sound like that at this stage of their lives and careers.

Let’s be forward and put this right out on front street, this may be the best album BOWLING FOR SOUP have ever written. There is a sincerity and maturity at play here that is severely lacking in most modern pop punk, but it doesn’t trade in any of the band’s trademark wit and cheeky charm in the process. It’s no secret the struggles that members of the band have been through over the last few years, and we don’t think anyone ever expects an emotionally rich, soul bearing album from the Clown Princes of Pop Punk, but it is nice to see more serious subjects tackled head on (even if they do it in their own way).

Songs like Hello Anxiety, Getting Old Sucks (But Everybody’s Doing It) and The Best We Can look at what it means to reach older age and look in the mirror and see a completely different person than you are used to. It’s about perspective and owning the person you are now and doing the best with the hands we have been dealt. Killin’ Em With Kindness is one of the most fun songs that the band has ever committed to tape, and the chorus is incredibly fun with the subversive way it presents it’s lyrics. It’s sure to be a hit with live crowds when they take the album out on the road.

Meanwhile, Alexa Bliss & I Wanna Be Brad Pitt provide ample opportunity for the band to name check celebrities in a loving way with tongues firmly planted in their cheeks.

It seems pertinent that BOWLING FOR SOUP have released a new album in the same year a new Jackass movie is released. While wholly unrelated for the most part, the idea of aging pranksters reconciling with themselves about the people they have become in wake of what made them famous, and dealing with the emotional tolls those things have put them through, while remaining fundamentally the same people at their cores is something that resonates through both things, and especially hits at the heart of fans of both.

Pop Drunk Snot Bread is a career best album from a band that has lasted the test of time. While not overhauling their sound in any dramatic way, adding the extra layers of emotional impact to their songwriting and allowing themselves to be a bit more open, alongside all the mirth has created a well written, perfectly balanced album from one of pop punk’s most consistent bands. Do yourself a favour and grab a copy of this album asap and prepare to have it stuck in your head all Summer.