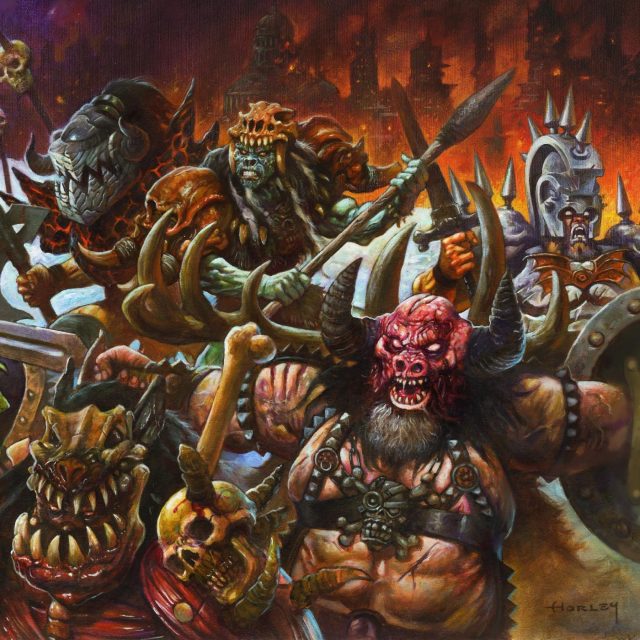 Overall Score: 8/10 songs : 8/10 replay value : 7/10 execution: 8/10 Pros: a well crafted selection of songs from a band I wrongly overlooked Cons: Some of the lyrics may turn casual listeners off

GWAR are a band I’ll admit to being less than familiar with from a musical standpoint. I’m aware of their image and having seem them on MTV‘s Headbangers Ball, & their appearance in Empire Records.

I approach The New Dark Ages with a completely clean slate, as it’s my first time hearing a GWAR album. They look like Mad Max characters conceived by Alan Moore on an acid trip and their music isn’t a million miles away from it either

Musically The New Dark Ages is more focused than I was expecting. Lyrically however it’s a completely different animal.Album opener New Dark Age makes reference to tits coming out and asses being shaken,which was unexpected. Blood Libel manages to segue a line about eating pizza into the Catholic Church being a bunch of peadophiles. After this I quickly realised all bets were off.

The New Dark Ages is a concept record based on a graphic novel they have out called GWAR in the Duoverse of Absurdity. Narratively is easy to follow and the songs help to elevate the storyline,while also not alienating people unfamiliar with the band or their lore, which is a huge plus.

GWAR are a band who I’ve always thought of as a parody band, while there are moments where the lyrics are puerile and nonsensical, there is a knowing charm to them you cannot help but chuckle along with.

Motherfucking Liar sounds like Mastodon being left to their own devices with a crate of Red Bull, I can see that chorus going down as an all timer live, especially with Festival crowds.

The Cutter is a thrashing ode to a fearsome character of the same name, as played here by guest vocalist Lzzy Hale, providing her most serene, ethereal vocal to an otherwise balls out song.

Venom of the Platypus sounds like Primus channeling Megadeth and is as good as it sounds. Ratcatcher sounds like Bark at the Moon era Ozzy, it has a real easy breezy 80’s feel to it, and some killer guitar shredding, it’s sounds way more jolly than a song with the lyrics “I’ve got the children in my basement for the rest of their lives” should ever sound.

There’s an air of bug eyed lunacy to GWAR, hopping between musical styles, and lyrics ranging from the absurd to the downright ridiculous. The whole thing feels like a jester show in hell where the bands are the only ones in on the joke at times. However for an album that is over an hour in length and is a concept album, it absolutely flies by. There is not an inch of fat on this record, with just enough diversity spread throughout that it never outstays its welcome.

While I may not be ready to pledge to full Scumdog status just yet,But based on this album I’d ride into battle with GWAR again at a moments notice.