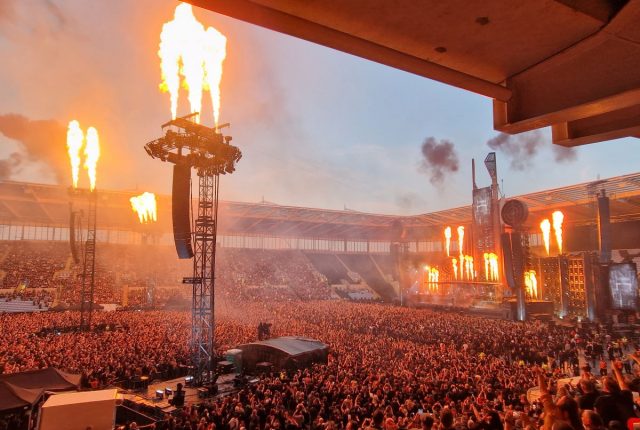 Ahhhh Rammstein. The German industrial metal pyro masters were last on these shores three years ago, bringing their gigantic, flame filled stadium show to Stadium MK in Milton Keynes. Three years and two covid postponements later, Till, Flake, Richard, Paul, Christoph and Oliver returned to the UK, this time to Coventry. Rammstein also came armed with a new album, Zeit, one which may not have been made if not for the Pandemic.

Songs from Zeit is how the party got started at the Building Society Arena, with Armee der Tristan providing an excellent atmospheric, moody opener and Zick Zack the snappy follow up. It’s the pairing of Links 2 3 4 and Sehnschut that follows that sees the first proper crowd participation, with circle pits breaking out both in the main standing area and those with access to the “Feuerzone” (think Gold Circle standing right at the front). For those who saw Rammstein on the last stadium run, the show and setlist is quite similar (hardly surprising when a rumoured 6 million pounds went into building the staging, and they have two full sets of it). However there were enough changes and modifications to keep things fresh, and even hardcore Rammstein fans are unlikely to complain about the similarities when the show is this impressive.

While some songs from the self titled album had to be dropped to make way for Zeit material, retaining Zeig Dich is an excellent choice as the band tear through it to huge response. This is of course nothing compared to the singalong for Mein Hertz Brennt, while the now customary “set the giant pram on fire” (words that would seem ridiculous if it was any other band) is present for Puppe.

Among the things retained from the first incarnation of this tour is the EDM remix of Deustchland – which has the whole venue up on its feet. That reaction feels almost mild compared to the reaction to the combo of the normal version of the track straight into Radio; the main riff of the latter full of chug that has heads banging all around the Building Society Arena. The lighting, excellent throughout, is at its absolute best here.

The set is at full pace now and there’s no let up. Flake is boiled alive three times during Mein Teil, the final time with a cannon that wouldn’t be out of place at Arsenal’s Emirates Stadium. Following that up with Du Hast into Sonne is the physical incarnation of joy being released by some thirty thousand metalheads losing their minds in the Midlands. The faces of those all around show that it was worth every second of the near two and a half year wait for this. The pyro on show for these songs, as with others, simply has to be seen (and felt) to be believed.

A short breather while the members of Rammstein made their way to the mini stage in the crowd used earlier by warm up act Duo Jatekok was made more entertaining by the cameraman’s instance on continuously returning to one moustachioed fellow time and again. Every time he reappeared, the cheers got louder. Duo Jatekok then reappear alongside Rammstein for a piano powered singalong of Engel (words helpfully provided to all on the giant screens). How do the band then choose to get back to the main stage? Crowdsurfing dinghies, of course!

After dialling it down for that brief period, it is full foot to the floor for the rest of the show. One of the many stand out things about this show is how effective the pairings of songs is throughout. Auslander is another song from the self titled album to be joyfully received, and being paired with Du Riechst So Gut just works brilliantly. The infamous cock-cannon has also had an upgrade over the enforced break, with Pussy bringing things in the first encore to a suitably foam covered conclusion.

Things are rolled back to the debut album with Rammstein’s (the song) menacing riff booming across the ample speaker stacks around the stadium. Ich Will looks set to close the show as it has done so many times for Rammstein previously, but our favourite Germans have one last twist up their sleeve. They bid us Adieu, literally, with the closing track from Zeit. It is a superb conclusion, and as the band take their bows before rising to the top of Fortress Rammstein and disappearing in a blast of fireworks, everyone is left to process what they just witnessed.

There are a couple of minor gripes that can be raised – the sound was in places too loud (as evidenced by news reports you could hear the show eleven miles away). This did make certain parts of songs hard to make out at times, but it did not seem to take anything away from the enjoyment of the thousands in attendance. It was another wonderful show from a band who, when combined with production and a show like this, are peerless across musical genres when it comes to live performances. Rammstein have indeed, done it again. If you have a chance to see this tour, do NOT miss it. There’s nothing else quite like it. 9 / 10