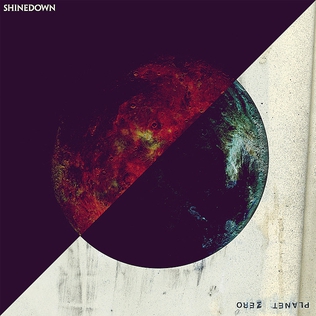 Overall Score: 8/10 Songs: 8/10 Production: 9/10 Replay Value: 8/10 Pros: A creative step forward for a band who remains very consistent Cons: Some of the slower moments and interludes could have been cut back

Platinum selling rockers SHINEDOWN have always made music that felt autobiographical. Armies of fans have pledged their allegiance to the band due to the heartfelt journal-like nature of their lyrics. In writing album number seven, they have decided to adjust the formula with Planet Zero owing just as much to the works of Aldous Huxley and Isaac Asimov as it does to the wider world around us.

Centering around the concept of dehumanisation in a dystopian future, it plays out like Brave New World in the Covid era. A loose concept album feeling like something we would expect from MUSE. It sees SHINEDOWN stretch themselves creatively, allowing them more freedom.

No Sleep Tonight kicks the album off in suitably frantic style. It’s a statement of intent from the get go, preparing us for the journey to come. The title track comes stomping in on its heels, with more stomp than Godzilla having a temper tantrum. It’s the first song on the album that drives the point home lyrically with “Out here on Planet Zero, we live like there’s no tomorrow/ I think we’ve reached our ceiling, they’re cancelling your feelings” blurring the lines between fiction and reality.

Dead Don’t Die and America Burning are the kinds of songs SHINEDOWN write in their sleep. Huge, lush arena-ready rock songs designed to ignite voices and fists. It doesn’t make them less impressive or potent. America Burning particularly features a digitised looping banjo giving a unique edge to it, even if lyrically it does play out like a Facebook post from your aunt who gets all her political information from Tik Tok. It does have a satirical feel to it, so perhaps that was the intention.

A Symptom Of Being Human, Hope, and Daylight lean more into the saccharine, cinematic balladeering the band have relied on from time to time. These are the moments that pull us out of the concept driven aspect of the record and feels like them resting on their laurels. Hope feels like a band on autopilot playing mad libs with their own hits from days past. Daylight however brings in a choir element towards the end, giving it a nice gospel uplift.

The Saints Of Violence And Innuendo is a complete 180. A late in the game pick-me-up that jolts the album back to life. Not since Pulp Fiction has a shot of adrenaline been more welcome. Army Of The Underappreciated picks up the baton, continuing the defiant, rebellious energy. It’s a fast, middle finger waving rager that distills the overall feeling of the album into three minutes and change.

Planet Zero has 20 tracks and is just under an hour in length. Admittedly half a dozen or so of those are interludes & PSAs from Cyren the album’s Hal 9000 style antagonist. With that in mind, they could have lost some of those and tightened up the flow. While not a concept album, SHINEDOWN do a good job of getting the themes and messaging of the album across while keeping the material relatable enough as to not alienate their core fanbase.

This is the heaviest and most experimental album that SHINEDOWN have released. Planet Zero has them employing more electronic elements into their core sound. This is also the second album produced by bassist Eric Bass in his home studio, allowing the band to fully realise their vision while not compromising any of the sound.

Make no mistake about it though, this album still has more hooks than the Hellraiser franchise. The inclusion of four ballads does slow some of the momentum down but it never grinds things to a halt. There is more than enough upbeat material here to keep us interested throughout.

Planet Zero may be SHINEDOWN‘s best record to date. It’s certainly their heaviest and, dare we say it, most confrontational. This is a big, loud mainstream rock record that has a lot to say. Whether you take the album at face value or as part of the narrative, it’s impossible to escape the events that influenced it. With all of that taken into consideration, SHINEDOWN have crafted an album full of heart, passion and with just enough unique flourishes to give them a new lease of life at this stage of their career.