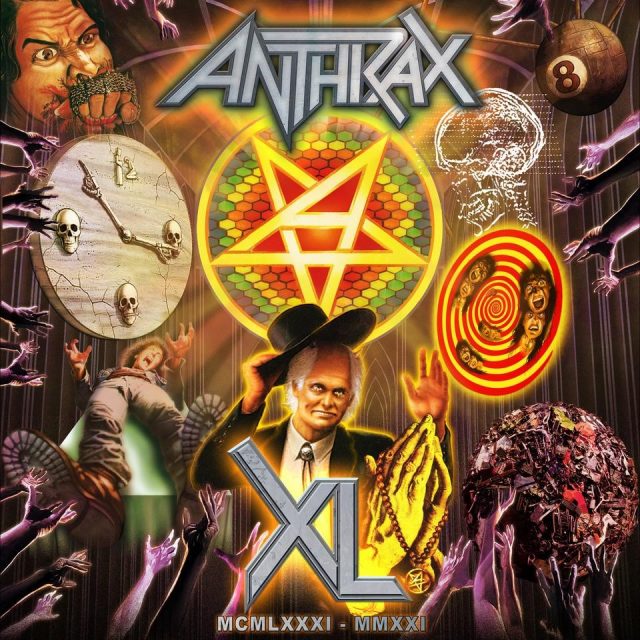 It seems unfathomable to think that Anthrax are now a band into their 41st year. It’s even crazier to think that they have seemingly not lost any of their edge over such an extensive passage of time.

XL was recorded last summer to commemorate the band’s 40th birthday and was presented as a global live stream, recorded in a studio. Much like the recent live release from Killswitch Engage, the very idea of a band who generates so much energy live like Anthrax, performing for absolutely no one is an insane one.

Over the course of the two hour live release we are treated to a run through of some of the bands most Iconic hits, as well as a cluster of the biggest moments from their most recent releases 2011’s Worship Music and 2016’s For All Kings. If you are any kind of Anthrax fan you have a fair idea of what to expect here.

Cuts like I am the Law, Caught In A Mosh, Indians and their cover of Antisocial are all bonafide anthems. Songs that sound as vital and fresh now as they did when they were written. Even when put up against newer songs like In the End, Fight ‘Em ‘Til You Can’t & Blood Eagle Wings, they still hold their own. It’s a testament to the songwriting ability of Anthrax, that they are able to craft a setlist of songs from any part of their timeline and it all sounds timeless.

The band themselves are in fine form, and although there is no crowd for them to feed off, you would never know. Every riff crunches and grooves with an extra hard edge, Charlie Benante’s drums sound like he’s hitting cinder blocks with sledgehammers, and Joey Belladonna‘s vocals sound better than ever.

An appearance from Chuck D of Public Enemy fame on Bring the Noise is also a welcome surprise, and provides another crowd pleasing moment. Anthrax have always been wrongfully the more overlooked members of the Big Four and it’s hard to see why. They have a solid catalogue of hits, and they also sound tighter than a jam jar lid live, even in a room without a crowd, they still come out swinging.

The only nitpick I have and it’s the obvious elephant in the room. This is billed as 40th anniversary celebration, and the cover art and poster art for the upcoming tour, both showcase album artwork from across all periods of the band, yet John Bush era material is omitted once again from the setlist, and I’m sure there a myriad of reasons for that, but still if you are celebrating your bands legacy, it should be celebrated fully. But that’s just my 2 cents and I’m sure plenty of people will disagree with me.

That minor niggle aside, this is a pretty solid set and it’s a great primer to get you in the mood for the aforementioned impending 40th anniversary tour that’s taking place in the second half of the year.

XL highlights a band that has left an indelible mark on heavy metal and especially thrash history and on this evidence, they show no signs of slowing down any time soon.

XL is out now on Nuclear Blast Records