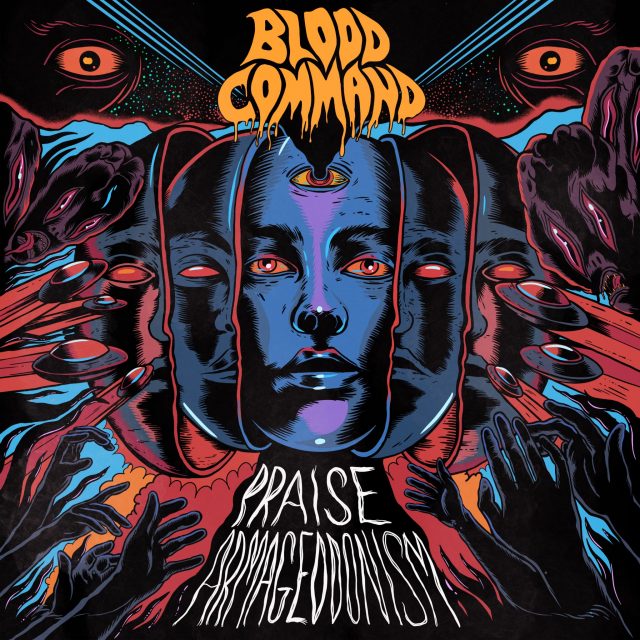 Overall Score: 9/10 Vocals : 9/10 Originality : 9/10 Songs: 9/10 Pros: Still such an exciting and original sound | Nikki Bruman adds a new level of intensity to the band Cons: Bruman's vocals might not be for everyone

BLOOD COMMAND have been one of the best and most exciting punk bands of the last ten years. For whatever reason though they’ve remained a cult band and never got the wider love they deserve. Perhaps the large gaps between albums which have all involved a line-up change haven’t helped but each time they come back it’s still amazing. Praise Armageddonism is no different.

The title track welcomes us to the album with a dramatic intro and narration before it lets rip with a savage blast of hardcore punk. Nikki Bruman immediately makes an impact with shrill throat-shredding screams which bring a new-found intensity to BLOOD COMMAND, she’s so fired up. In the last 30 seconds, they drop the sweetest pop melodies. It’s a song that covers so much ground in under three minutes. Which is a nice summation of what BLOOD COMMAND are all about.

Saturday City then brings in that trademark BLOOD COMMAND sound but adds in some huge dance synths and it sounds wicked. Bruman‘s vocals will be an acquired taste and won’t appeal to everyone but she starts to show a range she didn’t have in PAGAN. She’s drops so many memorable vocal hooks and the backing “woah“s on the chorus are classic BLOOD COMMAND. PAGAN felt almost like an extreme metal version of BLOOD COMMAND with some blackened elements. That intensity is still here but she’s just upped her game, there’s a real pop quality to the hooks.

The core of BLOOD COMMAND sound remains a blend of punk, hardcore, dance and pop and they still sound so distinct on that front. There’s definitely elements you can draw from other Scandinavian punk bands but BLOOD COMMAND have their spin on it that sets them apart. Like the disco beats combined with that bassline on The End Is Her is just so fun and danceable.

On the flip side, songs such as Everything You Love Will Burn or Nuns, Guns & Cowboys are all aggression. The former has a slight blackened touch, the riff is spidery and Bruman‘s screams feel extreme. Whilst Nuns Guns & Cowboys is a pure hardcore rager.

Musically this is just as accomplished as any other BLOOD COMMAND record. Effectively blending different elements together whilst still having livewire energy and excitement. The drumming on a track like Everything You Love Will Burn is impressive. Bruman really has slotted in naturally. It all comes together on A Villains Monologue, which captures everything that’s good about BLOOD COMMAND. “You won’t get your way, no Satan not today” is just one of many ridiculously sticky chorus hooks on this record.

As wild as this record is, nothing compares to the closer Last Call For Heaven’s Gate. All the disco, hardcore, pop, and metal this album throws at us gets blown away by the mental freak out. The track starts as we’d expect but when a saxophone creeps in around the two-minute mark, the track spends the rest of its time getting weirder before completely breaking down in the middle. It’s a completely out-there way to end but is certainly memorable and the closing narration brings the record full circle.

This is another outstanding record from BLOOD COMMAND. A band that deserves to break out from the underground at this point. The quality of the music has remained top tier and still sounds fresh and exciting. Hopefully they can keep this line up together and really start to build momentum because they’re too good to be stuck where they are.