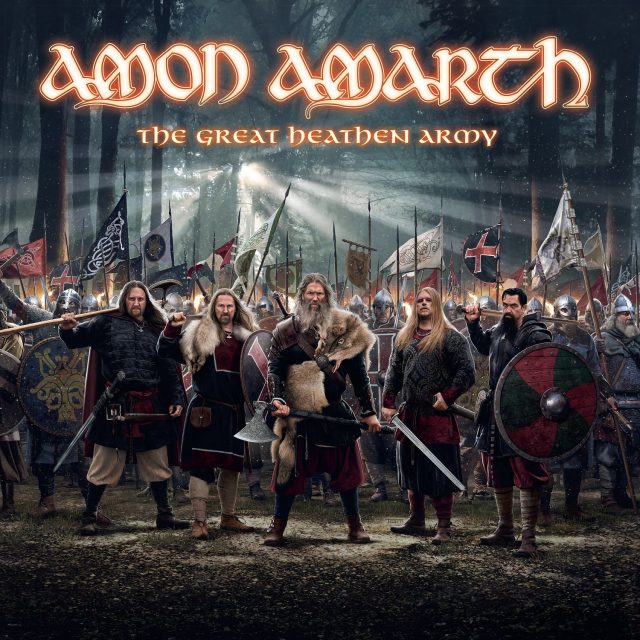 Amon Amarth haven’t sounded this vibrant in well over a decade. For sure, they have released some great songs, and good albums in that time period. But on The Great Heathen Army, the stars (or Amon Amarth themselves would probably say the fates) have aligned. A combination of some excellent songwriting and crisp production (courtesy of Judas Priest’s guitar wizard and general production legend Andy Sneap) leave them sounding fresh and energised like the band who first came to many’s attention with 2006’s With Oden On Our Side.

The opening track, Get In The Ring, kicks off with a big, foreboding riff and menacing drums before putting it’s foot to the floor and going full balls out. Johan Hegg sounds as fearsome as he ever has, and when you mix in an Olavi Mikkonen solo, it’s easy to see why this was chosen as the lead single. The title track to The Great Heathen Army does what it says on the tin; telling the story of a huge Viking army while the kick drums of Jocke Wallgren pummel alongside some hypnotic guitar work. There’s huge potential for this to become a big live favourite.

The album continues with the galloping Heidrun – a tribute to the mead producing goat in Norse mythology. It comes close to veering into Sabaton levels of ridiculousness at times, but the music around it is so good if it gets played live, there will be thousands singing “Who’s the goat?”. The Great Heathen Army also takes the title of “most metal song title” of 2022 with Oden Owns You All. Tales of war and battles and spears soaring are bellowed by Johan Hegg as riffs fly from the guitars of Olavi Mikkonen and Johan Söderberg that sound like the march of the vikings into the mouth of hell itself. Each of the first four songs on this album is distinct, but also still distinctly Amon Amarth. The quality in the variety really makes it stand out.

Another thing that comes across with this particular Amon Amarth album is a sense of fun. Aside from the aforementioned Heidrun, this is most evidence on the rollocking Saxons and Vikings. It features guest vocals from none other than Biff Byford of, you guessed it, Saxon. Literal Saxon(s) and Vikings. It’s the sort of thing where the idea might have been created on a drunken night out (Skol!) but where the end result is far better than you might expect it to be.

As the closing strains of the closing track The Serpent’s Tail fade out, it is quite clear that Amon Amarth have been at the peak of their creative powers all throughout this album. The chorus of the album’s title track commands those listening to hail to The Great Heathen Army. After a couple of listens, metal fans the world over will be hailing to Amon Amarth for their finest work in a very long time.

The Great Heathen Army is out now on Metal Blade Records. Pick up the album and related merch from the band’s official European online store right now.