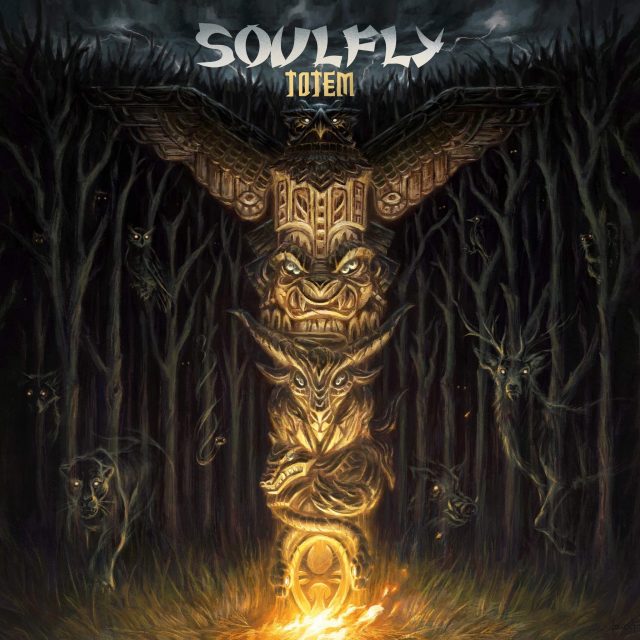 25 years ago when Soulfly started, I don’t think anyone could have predicted the band they would become. Originally more of a nu metal band, they have amassed a diverse rich catalogue, featuring death metal, thrash, grind and punk influences across the board.

It cannot be understated how creative and interesting Max Cavalera is as a songwriter and musician. In a career spanning over 40 years and 6 bands, he has cultivated a sound that is easily recognisable as his own, yet each band and subsequent album feels unique in and of itself.

Totem is the 12th album from Soulfly, and their first as a newly minted three piece. If you thought streamlining their lineup would lessen their impact, that could not be further from the truth. This is 10 tracks of explosive face pounding metal.

Coming in at 40 minutes long, this is all killer and no filler.  Totem takes the listener on a very brutal journey. From the full on thrash of opening cuts Superstition & Scouring the Vile, through to the punishing Death Metal attack of Rot in Pain. This is an exercise in grinding the listeners into dust.

The album’s title track adds a little drum & bass into the mix, before slowing down to a sludgy doomy dirge in its closing moments. Soulfly XII gives the listener a moment to breathe, and provides a very serene vibe in the album’s penultimate moments. Album closer Spirit Animal clocks in at nearly 10 minutes, providing one last epic that veers between full on thrash, balls out heaviness, before giving way to a euphoric ending closing the album on a chilled vibe.

Soulfly has always been an incredibly consistent band. They have remained so by changing up their sound with each album. Not enough to completely change their identity, but enough to keep things fresh. Even after all of these years and all of these different projects Max Cavalera remains one of the best songwriters in all of metal. Totem is another triumph in a career that is full of them.