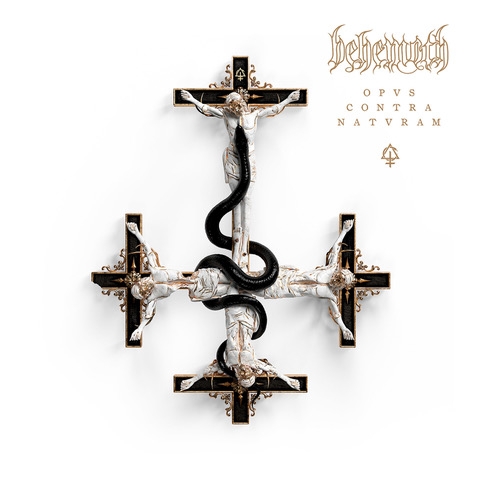 Overall Score: 9/10 Musicianship: 9/10 Production: 9/10 Songwriting: 9/10 Pros: A brutal assault on the senses that combines well polished production with a perfect mix of savagery and theatricality. Making it an ideal gateway into extreme metal for fans from outside the usual black and death metal genres. Cons: Potentially too mainstream for the true black metal aficionados out there.

Hot off the heels of their devastating headline performance at Bloodstock last month, Polish blackened death metal royalty BEHEMOTH are back with a brand new album! Having risen to legendary status over the past decade, thanks to landmark releases such as The Satanist (2013) and I Loved You At Your Darkest (2018). The group have firmly cemented themselves as one of extreme music’s biggest names, becoming stadium filling monsters in their own right. A feat that was hitherto unheard of on the black metal scene prior to their arrival.

When previously asked about the meaning of their latest album’s elaborate name, frontman Adam Darski (aka Nergal) explained; “The album title means going against the current. It’s the negative of the values and morals and ethics that I stand against.” Coming from a man who has spent years fighting the Polish Catholic Church, at the helm of a band which has spent three decades defying all expectations. Opvs Contra Natvram is clearly more than a theatrical title. It’s a statement of intent from a band that has become world renowned for forging their own path and disobeying the rules.

Thanks to a worldwide lockdown, BEHEMOTH were also for the first time afforded the luxury of a recording process with no real deadline. Giving the band a chance to revisit and perfect each track on Opvs Contra Natvram in minute detail, apparently often spending days at a time recording and re-recording each part. Adjusting every individual element, leaving them with a record that expresses their ferocious vision in its most mature and purest form.

The album’s opener, Post God Nirvana, serves as a perfect introduction. Slow and brooding, underpinned by some almost tribal drumming from Zbigniew “Inferno” Promi?ski. It sounds like a post apocalyptic blackened metal wasteland brought to life, drawing us in until the suspense builds to breaking point. The tension isn’t merely broken by the immediate follow up of Malaria Vulgata either. It’s positively shattered. Coming in at a hair over two minutes, the cataclysmic assault of blast beats and discordant death metal riffs is pure BEHEMOTH. Vicious, unapologetic and devilishly alluring in its sheer ferocity.

Already established as a firm fan favourite in their live setlist, The Deathless Sun trades a little of that savagery for a more measured and epic approach. The choral backing vocals adding to the already huge soundscape of chugging guitars and pounding double bass. Something has to be said for bassist Tomasz “Orion” Wróblewski’s performance too. He roams up and down the neck amid the maelstrom, filling empty space when it appears then laying back into the pocket to accentuate heavier riffs. Picking just the right moments and truly adding something special to the mix.

Ov My Herculean Exile takes things down another notch at this point, almost thankfully after the breakneck pace of Opvs Contra Natvram’s opening. Released back in May as an introduction to their new album, it was oddly initially met with some backlash from fans who said it “wasn’t brutal enough”. Even questioning if BEHEMOTH had lost some of their fire. In context of the album however, this small reprieve and more mature approach to pacing works. Simultaneously giving Nergal room to flex some of his vocal muscles, while also making the battering ram attack of its follow up, Neo Spartacus all the more impactful.

Disinheritance provides possibly the album’s most brutal all out assault. Easily matching the viciousness of Malaria Vulgata and just about anything else in their back catalogue. Before making way for the anthemic Off To War, a song that wasn’t actually written with the recent conflict in Ukraine in mind but that has since become a heavy metal symbol of unity and solidarity. It’s at this point BEHEMOTH turn the theatrics up to eleven. All Shakespeare and Deicide references aside however, Once Upon A Pale Horse has an undeniable groove and the subtle choral backing vocals add to the monumental sound.

Opvs Contra Natvram still has a little more to give too and the penultimate knockout blow of Thy Becoming Eternal leaves its closing line “We hail Satan. We hail thee” reverberating deeply in the listener’s mind. Even as the grandiose majesty of Versus Christus brings yet another monumental release from the kings of blackened death metal to a suitably epic and blasphemous end.

Another musical triumph for the band and a testament to their bombastic and uncompromising nature. Opvs Contra Natvram is a record that not only stands alongside BEHEMOTH‘s best work. Abrasive, uncompromising and thoroughly engrossing. It lays down the gauntlet for anyone who doubts their passion and conviction. Leaving another lasting mark upon the genre and demonstrating once more that they are still at the top of their game.