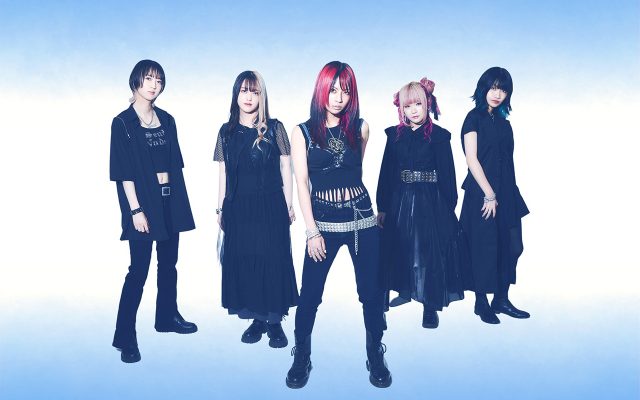 The Japanese scene has exploded in the last decade with acts such as Babymetal, Lovebites and Band-Maid making waves around the world. The latest act hoping to make their international breakthrough are BRIDEAR, who signed to Setsuzoku Records last year and this summer released their latest effort, Aegis of Athena. Ahead of their September tour we spoke to them about the album and the scene in Japan.

You recently released your latest album Aegis of Athena. What were your main influences behind this album, musically and lyrically?

KIMI: Musically, we combined elements of heavy metal and J-pop as before. It is what makes us stand out I think.

AYUMI: I was inspired by my own situation and the impact of the pandemic on people, especially regarding the lyrics this time. It is not only the music business that has been hit by the pandemic. I believe that everyone was affected in various ways, such as feeling lonely. In fact, I was unknowingly affected emotionally as well. The lyrics of the two songs, “Determination” and “Ray of Chaos,” are both inspiring to me and encouraging to everyone. I hope these songs will continue to be a source of strength for everyone when they hit a wall.

The band has undergone a few lineup changes since it started. How have the new members influenced the direction of the band, with Bridear initially following a much more metalcore driven style on albums like Baryte?

KIMI: It is becoming more rock, a little more melodic, and lyrically diverse, and I feel that this is a very good trend, with the individual personalities of the members coming through pretty clearly.

HARU: Each member’s own special skills and their personal influence have resulted in a more diverse sound. For songwriting it creates more dramatic and tricky arrangements, greatly expanding the range of the music.

What songs do you think people new to Bridear should listen to first, in order to understand what the band is about?

KIMI: I think Ghoul is the easiest way to describe BRIDEAR. It is powerful metal but also echoes all of our influences.

There has been a renewed interest in Japanese music and culture in recent years, with Babymetal and Crossfaith securing major record deals, and record labels such as Setsuzoku Records now emerging to release Japanese music in Europe and America. Are you excited by the potential of Japanese rock and metal on the international stage?

AYUMI: We are simply very happy that people are paying attention to Japanese rock and metal. Moreover, when we go to Europe on tour, we are welcomed with great cheers from the people there. I hope that we will be recognized as a band representative of Japan in the future.

MOE: Compared to Japan, I have the impression that hard rock/heavy metal is thriving a bit more in other countries. I would like to see the Japanese scene participate in this trend and make it even more exciting. I would like to be active both in Japan and overseas so that we can take the lead in this trend!

Heavy metal music has always been seen as a very masculine style of music, but the scene in Japan appears to be challenging those perceptions thanks to groups like Lovebites, Aldious, Band-Maid and yourselves. Do you think it is easier for all-woman groups to succeed in Japan compared to other countries?

KIMI: It is difficult to compare because I don’t have a clear understanding of the reasons why other countries have fewer all-women bands, but I think there are many opportunities for them to be noticed.

NATSUMI: While Japan has a large number of female idols and dance groups there are still only a few all-women metal bands in Japan by comparison. But like KIMI said it is hard to compare from the Japanese perspective. However, it still takes time to be recognised by many people in Japan. So I don’t think it is easy to succeed compared to other countries, and I think we continue to work hard for recognition.

“I am confident that people who have not yet heard metal music or who have had difficulty getting into metal music because of stereotypes will be more likely to accept metal music if we, as women, play it from the heart and with high levels of skill. You can do it!”

Do you hope you can inspire women around the world to become more involved in metal and change their own scene’s image?

HARU: We get word that people have started listening to metal since they discovered BRIDEAR. We are happy to be a gateway to metal and a bridge to a new genre.

NATSUMI: I am confident that people who have not yet heard metal music or who have had difficulty getting into metal music because of stereotypes will be more likely to accept metal music if we, as women, play it from the heart and with high levels of skill. You can do it!

Has the “kawaii metal” movement (Babymetal, Ladybaby, etc.) has helped or hindered the metal scene in Japan?

KIMI: Helped. I think they have made a great contribution to bringing quality heavy metal music to people who usually listen to pop music. If a band incorporates formal HEAVY METAL elements (HEAD BANGING, etc.), people in Japan will inevitably treat them as oddballs, but I think it is wonderful that they have included these elements and appealed to the Japanese audience.

AYUMI: It has helped for sure. I think they were powerful enough to draw in people who were not previously interested in the metal scene. We hope to bring many people into the metal scene as well but from the band perspective. It is up to us to represent what else Japanese metal can produce.

What are you hoping to do this year to support the release of Aegis of Athena? With some countries still enforcing restrictions due to Covid-19, has this forced you to change your plans?

AYUMI: We recorded Aegis of Athena, which represents the current BRIDEAR lineup, mentality, and ambition. We are trying to play more in Japan on a regular basis to reach people who do not yet know us, but still tour abroad! We were the first band from Japan to tour internationally after the height of covid, so we did not let it stop our efforts in that regard. We also did many YouTube playthrough videos to keep people engaged when we couldn’t perform as much as we liked.

HARU: BRIDEAR was the first band to tour the EU and UK after covid, and although we took a lot of hits from covid, like everyone’s activities did, the strong desire of all the members, staff and fans was the key to our success. We hope to continue to be a band that can lead the way and transmit our message internationally. Next year, we plan to go to even more places we have never been.

Bridear have been very prolific in the studio with 3 albums released since 2019 alone. Have you already started writing your next album?

KIMI: Currently, I am writing songs in bits and pieces. With the addition of new members, we hope to incorporate new challenges.

AYUMI: With AEGIS OF ATHENA, the position of my music within BRIDEAR has been solidified, and I have more things I want to create. I have been able to hear the “BRIDEAR style” in more and more of my works, so I would like to push it to the limit in the next album.

HARU: MOE has joined our band and I’m hoping to write a song about what I felt while touring with her! I’m really looking forward to our upcoming EU & UK tour!

NATSUMI: I have not started writing new songs yet, but I will write what comes to mind when I am presented with a deadline for submitting the album when it is ready to be released. I think I will write what I want to do after touring in Europe and Japan, incorporating various elements.

Lastly, what other bands do you think fans of Bridear should check out?

KIMI: Please check out Little Lilith, who often show with us in Japan.

Thank you for the interview! See you on the road!

BRIDEAR new album Aegis of Athena is out now via Avex Trax (Japan) and Setsuzoku Records (International). The band recently wrapped up the UK leg of their tour, check their website for future dates.