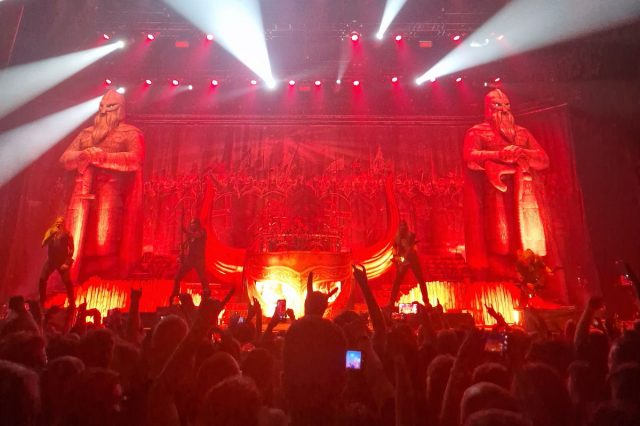 As Machine Head main man Robb Flynn himself said, It’s Saturday night in London F***ing England! This past Saturday saw one of the metal tours of the year come to town, and there were plenty of fans through the doors early for the London debut of The Halo Effect (8). What follows is one of the best opening act performances Wembley Arena has seen in years. Frontman Mikael Stanne has a huge grin plastered on his face from start to finish – and well he might as he and his colleagues (all formerly at different times of Gothenburg metal royalty In Flames) produce a fantastic thirty five minute performance, setting the bar at Olympic pole vault level for their more established tour mates to follow. Highlights include the opening Days Of The Lost, anthem in waiting Gateways and especially their first big hit single and closing track Shadowminds. If you’ve not yet come across The Halo Effect, get them checked out pronto.

It’s almost hard to know where to look as Amon Amarth’s (9) safety curtain comes down. The drumkit is sat on a menacing looking viking helmet drum riser, while two enormous (inflatable) viking statues loom over either side of the stage. That may look impressive but once Johan Hegg and co launch into Guardians Of Asgard, a huge moshpit opens and all eyes are either on the pit or the band themselves. With the chorus accompanied by a frankly ridiculous amount of pyro and several thousand fists pumping the air, it’s about an impressive a start as one could have hoped for.

What follows over the next seventy minutes or so in terms of a metal show as a spectacle is something that most bands can only dream of and their contemporaries like Slipknot and Sabaton would be extremely happy with. It’s not quite at the Rammstein level – but that’s almost an unfair comparison because no one else is. We’ve got soldiers dueling during The Great Heathen Army, Loki stalking the stage during Deceiver Of The Gods and confetti filling the sky during Heidrun (Who’s the goat? Who’s the goat?).

Mix in old favourite The Pursuit Of Vikings with huge audience participation which carries through the likes of Shield Wall (complete with extra Vikings) and several drinking horn toasts alongside Raise Your Horns and this performance has just about everything. One thing it hasn’t had until now is a gigantic sea serpent and Johan Hegg wielding Mjölnir to set off a cascade of fireworks – but that’s what the set closing Twilight Of The Thunder God is for!

It’s very easy to see why Amon Amarth now headline festivals from Bloodstock to Wacken and all across Europe in-between. From their mainstream breakthrough With Oden On Our Side in 2006 to this years’ excellent The Great Heathen Army, they’ve now amassed a catalogue that can produce a headline set with no filler – and they now have the production to match. It’s a minor shame that this wasn’t in front of a totally sold out Wembley Arena – a reminder that we are in a cost of living crisis – but the thousands who were here saw something very special indeed.

After the overwhelming visual spectacle provided by Amon Amarth, it takes a little while to re-adjust for Machine Head (8). With staging mostly consisting of some elaborate lights, and starting off with new track Become The Firestorm, it feels ever so slightly underwhelming. The mix is also slightly off to begin with, but with several thousand bellowing every word of Imperium along with Robb Flynn, it doesn’t affect proceedings too much.

The sound issues are quickly resolved for a monstrous Ten Ton Hammer, and from this point Machine Head really hit their stride. Slightly surprisingly every song of this ten track setlist aside from the opener is at least ten years old, so an airing of I Am Hell is equally unexpected (at least if you haven’t been peering at setlists from the earlier shows on the tour) and welcome. The accompanying blast of pyro is also hot enough to singe a few eyebrows off the first few rows, if there was any left after Amon Amarth.

The usual monologue that accompanies Darkness Within was adapted to reference both the Taylor Hawkins memorial show and the passing of Her Majesty The Queen (which was treated with a largely positive reaction), before a thunderous Locust produced another huge sing-a-long. That promptly turned into a bounce-a-long for the nu metal classic From This Day which sounded as good as it did the day it was released 23 years ago. Finishing in the time honoured one-two punch of Davidian and Halo, Machine Head more than recovered from a slightly slow start to send everyone home into the warm night very happy at the end of an excellent London evening of heavy metal.