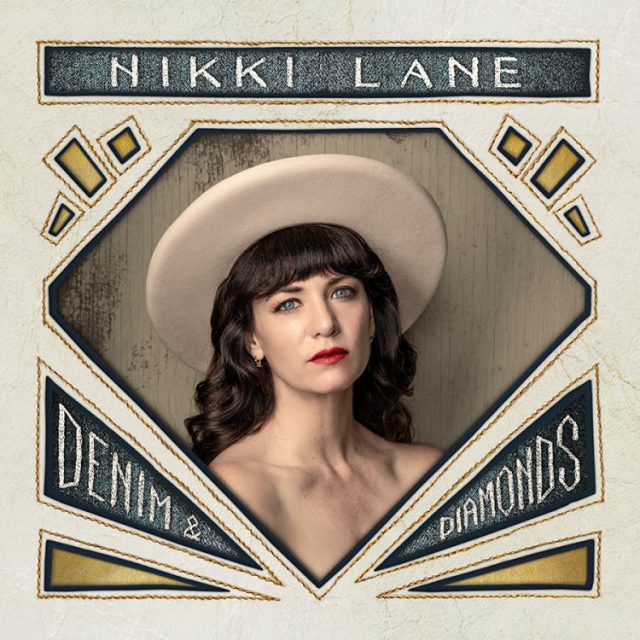 So says NIKKI LANE on First High, the opening track on her new album Denim & Diamonds. For this set, her first in five years, she has teamed up with Joshua Homme of QUEENS OF THE STONE AGE, who produced and mixed the album, along with affiliates like Alain Johannes (guitar), Dean Fertita (organ), and Michael Shuman (bass). The names don’t stop there as other assorted rockers, including Matt Helders of the ARCTIC MONKEYS who worked with Homme on IGGY POP‘s Post Pop Depression (2016) join the fray. Of course LANE, to quote THE OSMONDS, has always been “a little bit country, a little bit rock ‘n’roll”, more punk than pageant queen, and so this collaboration seems a fairly logical step, although if you’re expecting a desert rock album you’ll be disappointed.

The rock influences are strong on the first two numbers, First High, with its pounding bass, ragged Stonesy riffs and urgent chorus as well as the empowerment anthem title track with a guitar sound you could take straight from QUEENS OF THE STONE AGE‘s …Like Clockwork (2013), Matthew Pynn’s pedal steel work aside. Both tracks show LANE at her best, the song writing has the sassy stamp of individuality you’d want from her, the melodies are strong and the playing has the confident swing and easy charm of the best classic rockers. The trouble is little else after matches their quality.

The best of the more traditional country songs, Faded, is up next. A sleepy waltz suggests resignation and regret as LANE achingly admits “I just can’t get enough of your love”. It suggests a deep, over-powering love, perhaps curtailed or denied.

Born Tough is a peppy, universal survivor story with a TOM PETTY-ish groove, but the lyrics are too formulaic to hit home. The song leans into the triteness that country music is often accused of. A trap that Try Harder also falls into, although its big hearted spirit helps pull it through and both songs have undeniably strong hooks with huge choruses made for radio. Good Enough continues with the happy, generous vibes. Over acoustic guitars and the lap steel, LANE sings “it’s a beautiful morning to tell someone you love them”. It’s an ode to keeping it simple, getting the basics right and prioritising love, as is Live/Love, and so it becomes clear this is a theme of the album. Is it all too clichéd? It feels wrong to judge it that way but again we’re in danger of things getting a might bland.

Latest single Black Widow brings back the grit with a stomping, almost motoric drive under its rockabilly chassis, a late attempt to reinstate the rock-ist sensibilities, it does at least shake things up a bit after the forgettable Pass it Down.

Album finale Chimayo is a Mexican-flavoured, dusty border town ballad which aims for spaghetti western melodrama with a, at turns, sultry and impassioned performance from Lane, but it never quite catches fire. It’s an interesting experiment though.

Taken individually, most of the songs here are good, commercial country rock songs, we just feel there was an opportunity, or perhaps rather an expectation, that things would get a bit darker and more dangerous. NIKKI LANE doesn’t seem worried though, and that must be a good thing.