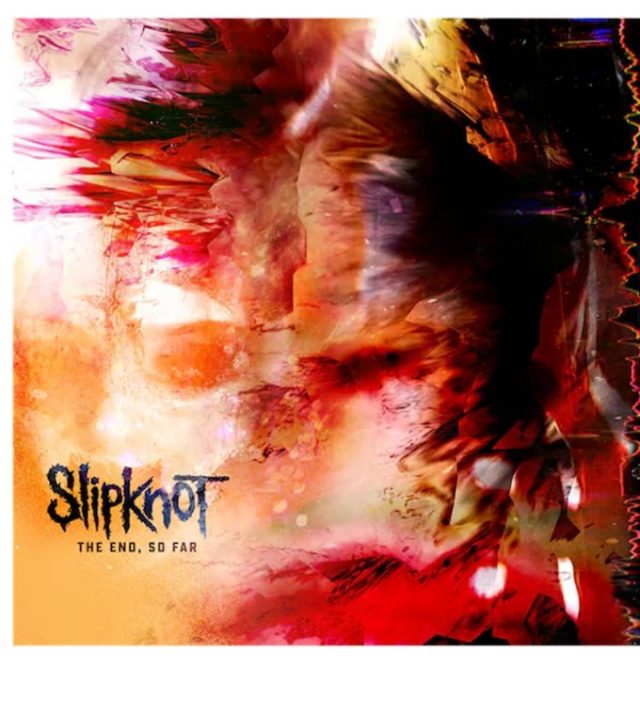 Ever since their emergence in the late 90s, Slipknot have been the leaders of the scene. One of the most intense and innovative bands in the metal genre. They have gone from underground heroes to festival headlining juggernaut. They became one of Roadrunner Records most defining bands, and creators of one of the most eclectic bodies of music in mainstream metal. So then, the question becomes now what?

The End, So Far is the Iowan Nonet’s seventh and final album on their home label. It follows their 2019 album We Are Not Your Kind, and sees them push their musical boundaries even further. How much further you ask? Well, the album opens with a five minute ambient pop track called Adderall. If that doesn’t spin you for a loop on the first listen, I’m not sure what else could.

It’s an arresting and evocative opening that grabs the listener’s attention immediately. Just not in the way you’d expect. The album’s three singles  The Dying Song (Time to Sing), The Chapeltown Rag & Yen follow in quick succession. Grouping these particular songs together seems like a masterstroke. After the jarring opening they look to ease you back into more familiar territory.

Hivemind feels like classic Slipknot. Hulking great riffs, stampeding drums, and a trademark Corey Taylor chorus with a hook so impressive that even Peter Pan wants no part of it.

Warranty is one of the most baffling songs on here. Musically it treads the well worn Slipknot sound, it’s fine if somewhat uninspired. Corey’s word salad lyrics do nothing to push the quality further. It doesn’t come off as well as perhaps intended. This one could have been left on the cutting room floor.

The latter half of the runtime houses some of the album’s biggest and most goosebump inducing moments. Medicine for the Dead is a brooding, propulsive anthem. Like a nursery rhyme from the darkest parts of the human psyche. It’s a fever dream made real, complete with distorted, contorted loops and music box twinkling. If one other track stays with you outside of the opening and closing tracks it will be this one.

Heirloom has one of the catchiest choruses the band have ever written, creating an earworm of the highest order. H377 provides the counter balance by being one of the most antagonistic on the record and Corey declaring “I know the reaper is a liar!”

The closing track Finale is my favourite track on the album. An ethereal esoteric anti – ballad.  If this was the last thing Slipknot ever commited to tape then Finale would be the perfect way to end it all. Sombre, melancholy musings are bolstered by a gentle piano. This feels like a band dealing with the idea of their own collective mortalities, both as 9 individuals, but also as an entity. The choir that punctuates the track sends shivers down the spine, adding an extra layer of gothic melodrama to the track.

Craig & Sid both shine on this album. Atmospherically there are moments that are so warped and eerie, they feel like tripping in a haunted house. The electronic elements tie everything together in ways that see tracks extend and morph into one another like an ever evolving shapeshifter. It all gives the feeling that this album is meant to be experienced as a whole. Like one giant puzzle that reveals itself over time, as the whole picture comes into focus.

One of the things that will likely be a point of contention is the production. Musically everything sounds massive. Listening through headphones is a particularly enriching experience, where the album truly reveals itself. The vocals on the other hand; There is more than one occasion on the album where the melodic vocals sound a tad overproduced and artificial at times, most notably on the opening of Dying Song. It’s not consistent throughout the record, so it may have been a stylistic choice, if it was, it is a very noticeable one.

This is Slipknot at their most experimental, and most united. This is the sound of a band redefining themselves. As they shed their skin in front of our very eyes and present who they are to the world once again. When the album really hits, it is euphoric and you’ll know exactly why you fell in love with the masked maniacs in the first place.

Slipknot started their journey with Roadrunner Records wrapped in a cocoon of unbridled rage. It seems fitting then they leave the label as a voltron of finely tuned violence. Each piece of the machine snapping into place to complement and enhance each other. This synchronicity between members helps to create a symphony of savagery & sincerity. Even in the moments when things don’t quite hit the mark, the cohesion between the members and their collective vision is astounding.

The End, So Far feels like Slipknot paying homage to, and laying to rest a vital part of their careers. You can hear echoes of their evolution scream through the halls of this album (even the album cover pays tribute to their 2009 headlining set at Download). This is not quite the end of everything, but it feels like a welcome bookmark as the next chapter looms.

The End, So Far releases on September 30th via Roadrunner Records.