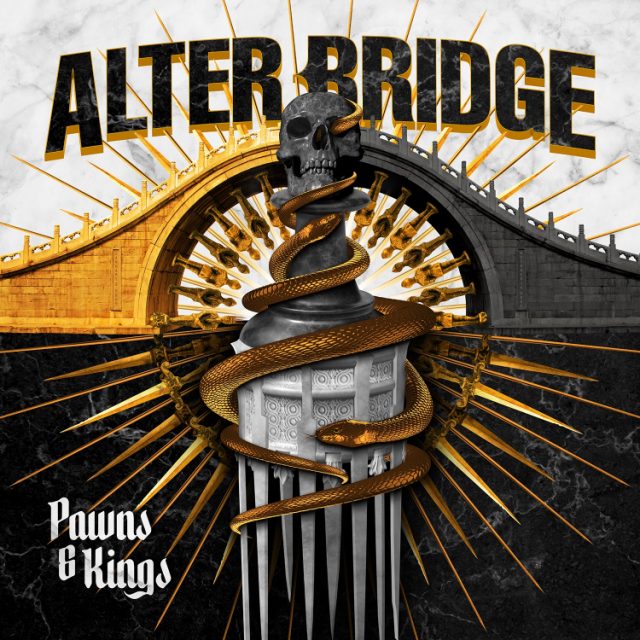 ALTER BRIDGE come with a kind of prestige within the alternative music world. While not big mainstream names like METALLICA or IRON MAIDEN, their near 20 years as a band has solidified them as a band to look out for. Whether it be the hard-hitting riffs of Metalingus or the brutally emotional Blackbird, ALTER BRIDGE are certified melodic metal heavyweights. Looking to add another heavy hitter to their arsenal, attentions turn to the recently released Pawns And Kings.

After Walk The Sky’s (2019) cycle was cut short by the pandemic, the band chose instead to focus on new material. Though between Myles Kennedy’s stint with SLASH, Mark Tremonti’s flirtation with his Frank Sinatra project, and the pair both juggling solo projects, does ALTER BRIDGE material suffer? With ten tracks ahead of us, expectations are certainly high.

The four-piece waste little time reminding us of what we had been missing with This Is War. Expansive riffs push the track open before Kennedy’s combination of ethereal vocalisations and heavy chugs decimate the soundscape. The verses are dark and brooding, perhaps typical of ALTER BRIDGE but Kennedy carries a certain edge this time round. As we’re encouraged to “fight for your mind” the chorus blooms into the epic battlefield our thoughts conjure. Though this is expansive in nature, the sound feels stripped down, much more Fortress (2013) than Walk The Sky. There are some compromises being made in scaling down the sound however as “taking every good man down” begs for sharper, much darker vocals. Meanwhile Dead Among The Living’s chorus lacks a certain sense of weight to it. It almost feels as if scaling back has caused ALTER BRIDGE to restrain themselves in places. We are all aware of their potential seven albums in so to hear this confinement is saddening.

Something which hasn’t changed for ALTER BRIDGE is the societal commentary. Kennedy’s vocals slither over the chug of Silver Tongue, a cautionary tale of those seeking to manipulate others. It rings similar to Walk The Sky’s Indoctrination but feels much more sinister. “I’d rather watch it burn away than say I was wrong” is delightfully plain in its narcissism as backing vocals from Tremonti add a wonderful timbre which draws us in further. Almost acting as the other side of the coin, Sin After Sin’s percussive opening feels hypnotic. Brian Marshall’s bass slips beneath Kennedy’s slide guitar to create beautifully minimal verses. “You want so much more than we should ever have to give” is again wonderful in its simplicity, Tremonti and Kennedy allowing themselves to indulge in plainness. So much so that when their voices come together in a moment of bubbling rage, we become intoxicated by this golden age of ALTER BRIDGE.

While the band return to glory days in some respects, they aren’t afraid to show their improvements. Enter the Tremonti led Stay. The guitars feel brighter than the previous tracks, perhaps like fan favourite My Champion. Though the baritone vocals of Tremonti are what seals the deal of this introspection. Tremonti has always hidden his light beneath a bushel in terms of singing with ALTER BRIDGE but it’s here we hear the vast amount of work that has gone into his voice thanks to the Sinatra project. “I’m trying to be all I can be” floats through our soul and hooks us right at the end along with lilts of guitar melodies under the second verse. For those who think this is the emotional slugger of Pawns And Kings are destined to be surprised and levelled.

Fable Of The Silent Son is arguably one of the most impressive songs ALTER BRIDGE has ever produced. Not just because of its Blackbird eclipsing eight-minute runtime. This is ALTER BRIDGE at its finest. Kennedy’s pondering of how we are “blind to our own decay” is hauntingly striking. Layered vocals throughout the verse create a morose depth though this melodic number is no ballad. This introspection of a soul needing to save itself from itself is brooding and emotional. “A wasted life is still worth saving” severs the heart strings and pulls the sinew apart as the track fades to a singular muted riff. Rising like their favoured phoenix from the ashes, the breakdown which follows is heavy for ALTER BRIDGE, ushering in tones of ABIII (2010). Again slightly typical of this band, Fable Of The Silent Son takes the negative this protagonist has found themselves in and resurrected them. A theme which carries into the brighter Season Of Promise. As we move through the album, we find tracks like these to be slightly predictable. Not bad but when the bar has been raised so high, not every track will reach the standard. Season Of Promise speaks of leaving behind a legacy for those after us. In terms of ALTER BRIDGE’s legacy, they have absolutely nothing to worry about this this record.

“Prosper at any cost in a world for the taking” Kennedy encourages on the dripping Last Man Standing. Eliciting savagery is nothing new for ALTER BRIDGE, the band has always carried a fight for what you want mentality. However Last Man Standing’s driving force comes in the form of a scathing solo from Tremonti. Our only complaint is it could have come a little sooner to elevate the message to where it needed to go. The oozing instrumentals however showcase the band’s incredible musicianship and the willingness to play with their own soundscapes which bring us to the closing title track. In context of the album, the title track brings it full circle as we return to standing our ground; “It’s time to show the Devil what we are”. The verses come with the grit which This Is War could feed upon. With its militant guitars, we can almost hear Tremonti’s love of speed metal flowing through the track’s veins. The joy of ALTER BRIDGE comes not only with their lyrical story telling but from their sonic weaving of tales. Heavy riffs stand us on the brow of a hill looking over no man’s land while the solo thrusts us into the heard of the action, ready to slay our demons. While the track comes in with grit, the reintroduction of the ringing guitars toward the end leaves us very different people.

Typically, this is where we would surmise what we’ve just heard into a bite sized chunk. Though this proves slightly difficult with Pawns And Kings. As with any album it comes with its positives and negatives. ALTER BRIDGE have indeed returned to their strengths and have produced arguably the best record since Fortress. Though what we would love to hear is ALTER BRIDGE lean further into their stripped back sound. The door to their cage is open and they have a foot out of the threshold. They just need to, in their own words, “release the hounds of doom”.

Pawns And Kings is available now via Napalm Records.